THE NORTHERN WHITE RHINO: HOW THEY CAME TO BE FUNCTIONALLY EXTINCT

The recent discovery of the fossilised remains of a giant rhino species, said to be the largest land mammal ever to have walked the earth, reminds us just how long rhinos have been on this planet. The Paraceratherium linxiaense, recently discovered in north-western China, is believed to have lived 26.5 million years ago, a giant, weighing around 21 tonnes and reaching a height of 23ft, enabling this tall herbivore to graze treetops.

Fast forward to today, and there are now only around 27,000 rhinos left in the wild outside parks and sanctuaries, making rhinos one of the most critically endangered species on earth.  Since the start of the 20th century, rhino numbers, which were at a healthy level of around 500,000, began to drop as human activity such as hunting and poaching impacted on their population.

Poaching and illegal trade of rhino horn has continued to increase sharply and remains one of the major reasons rhino are still endangered today. Rhino poaching is big business, one rhino horn can fetch in excess of an incredible £200,000, and criminal gangs are now well-equipped to track and kill rhino. Political and economic instability within countries can also increase the threat of poaching. Added to this, is the encroachment of wildlife habitats by human development resulting in vast areas of habitat loss and reduction in rhino populations.

There are around 18,000 southern white rhinos in Africa today, having recovered from an all-time low of around only 100 individuals in 1895. However, an increase in rhino poaching since 2008 is once again threatening the total population. 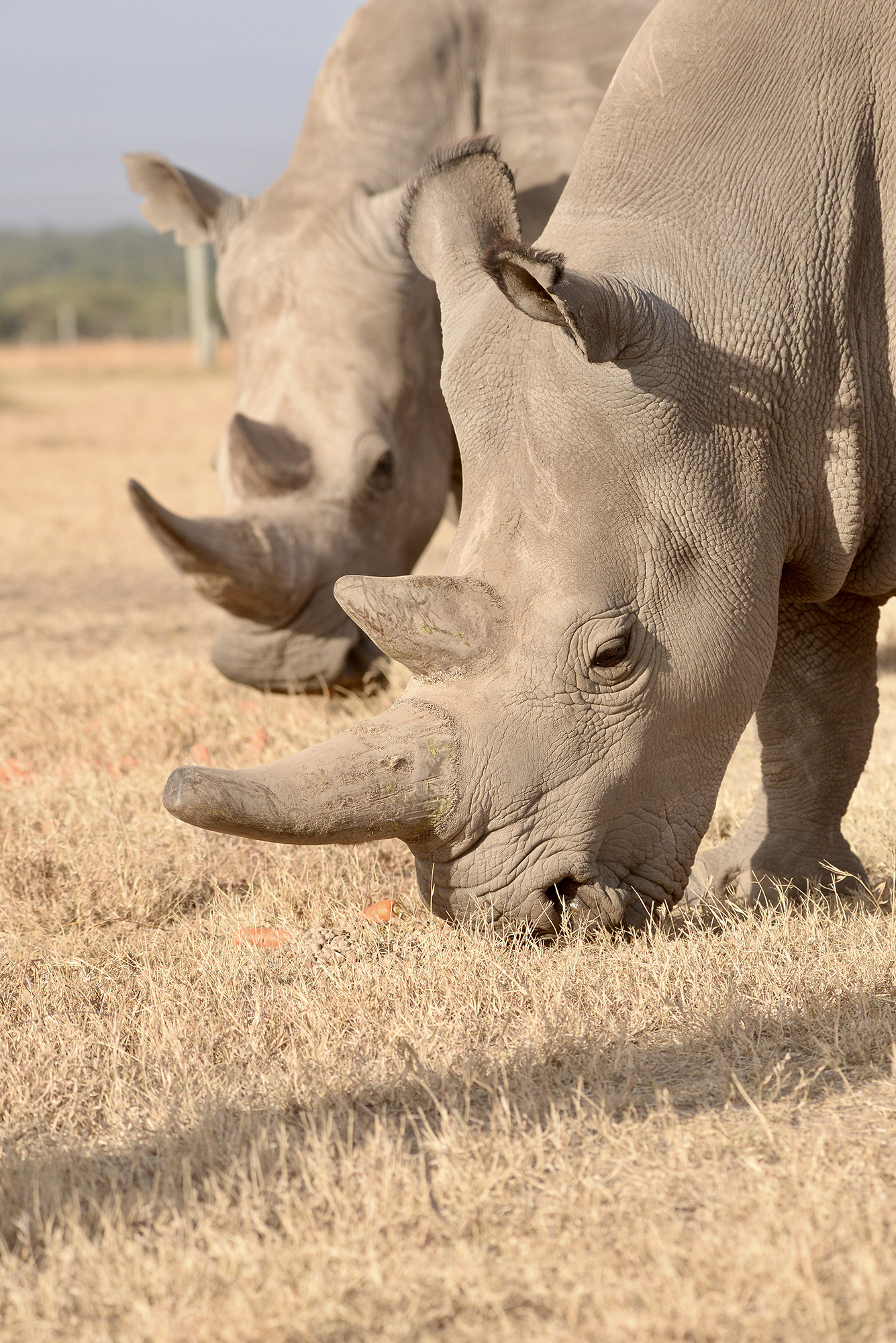 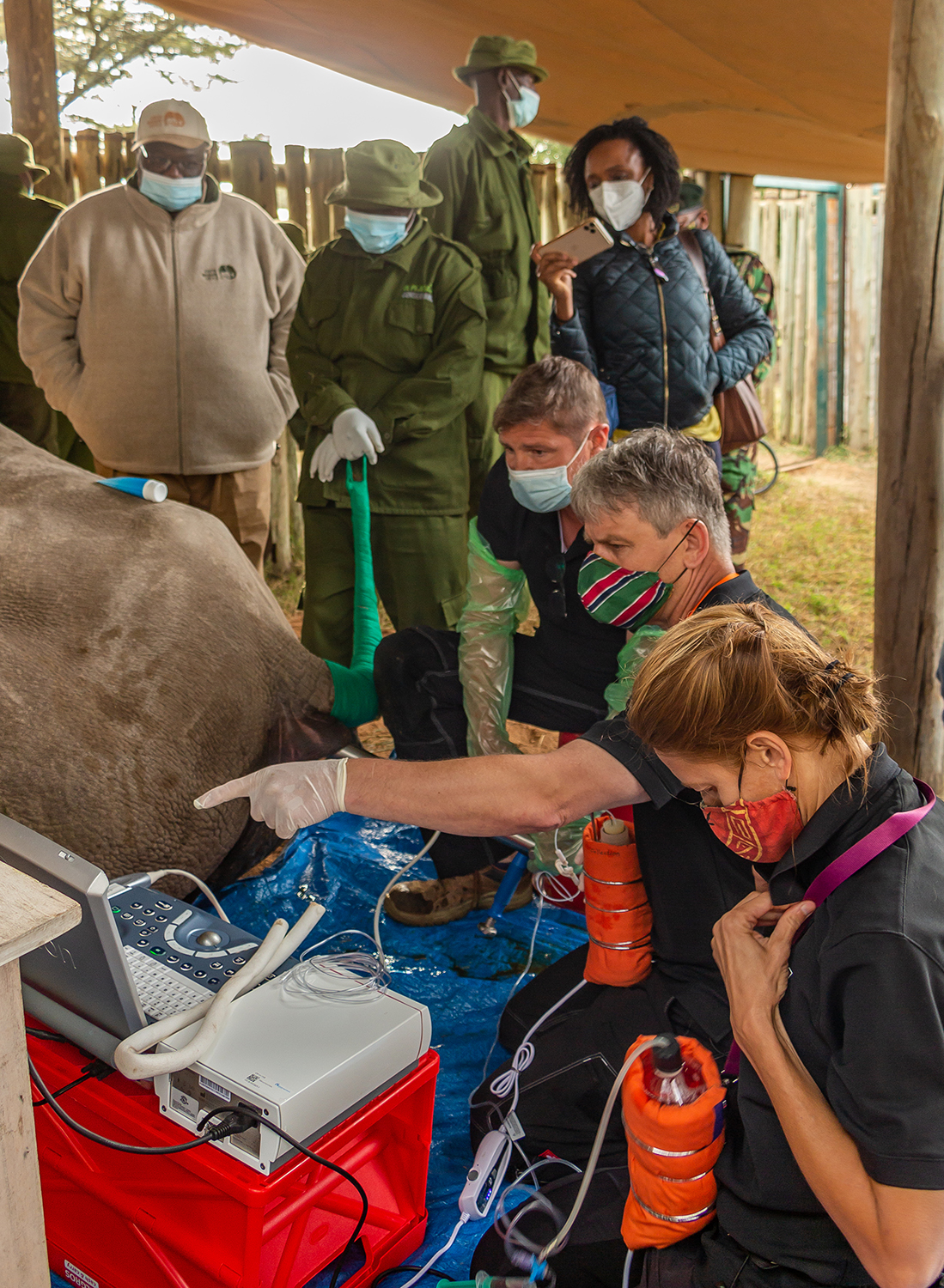 WHO ARE THE NORTHERN WHITE RHINOS?

The other sub species, the northern white rhino, paints a much bleaker picture. Years of widespread poaching and civil war in their home range devastated their numbers to the point where they were declared functionally extinct in 2018 when Sudan, the last male in existence, died of old age. Functionally extinct means that the number of animals is so small that they no longer play a significant role in ecosystem function; or that the population is no longer viable. The remaining two northern white rhinos, females Najin and Fatu, reside in Ol Pejeta Conservancy in Kenya under constant protection.

The northern white sub species was first discovered over 115 years ago in 1907 where there was a healthy population and by the 1960s, they were more abundant than their southern white counterparts, with over 2,000 rhinos ranging in the wild. But within a decade the numbers of northern whites dropped to just 700 and by 1984, only 15 individuals remained in the Garamba National Park in the Democratic Republic of Congo. A brief interlude of intervention by conservationists brought the numbers up to around 30 but an outbreak of civil war led to further a significant decline in the numbers and since then, due to poaching and death, only Najin and Fatu remain.

Many attempts to save the northern white rhino have been undertaken during the early part of this century. In 2009, Sudan, a northern white male, was translocated to Ol Pejeta Conservancy from the Dvur Kralove Zoo in the Czech Republic. He had originally been captured in 1975 from Southern Sudan and his return to Africa, alongside Najin and Fatu and another male, Suni, was an attempt to get them to breed, with the theory that they might respond better in their natural habitat. Unfortunately, this did not work. The four mated but Najin and Fatu did not conceive. Five years later in 2014, Suni died of natural causes aged 34 and Sudan died four years later in 2018 aged 45 years. This was a very bleak day for the future of the northern white rhino. With only two females left, how is the sub species ever to survive?

However, it is not all bad news. Since 2019, an international consortium of scientists and conservationists called BioRescue has been harvesting immature egg cells (oocytes) from Najin and Fatu, and artificially inseminating these using frozen sperm from deceased males, including Suni in order to create viable northern white rhino embryos.

HELP SAVE A RHINO SPECIES

If you would like to be part of this incredible race to save a species, you can make a donation or consider an adoption. Najin and Fatu are cared for by our partners at Ol Pejeta Conservancy in Kenya. These two remarkable ladies are our only remaining link with the species. By adopting them you are not only helping to keep them safe and happy, but you are contributing to ground-breaking science to give the northern white rhinos a chance at future generations. You can also adopt Sudan in his memory where funds raised will be used to help continue the northern white rhino IVF programme as well as for the protection of Najin and Fatu.

Donate to Help Save the Northern White Rhino