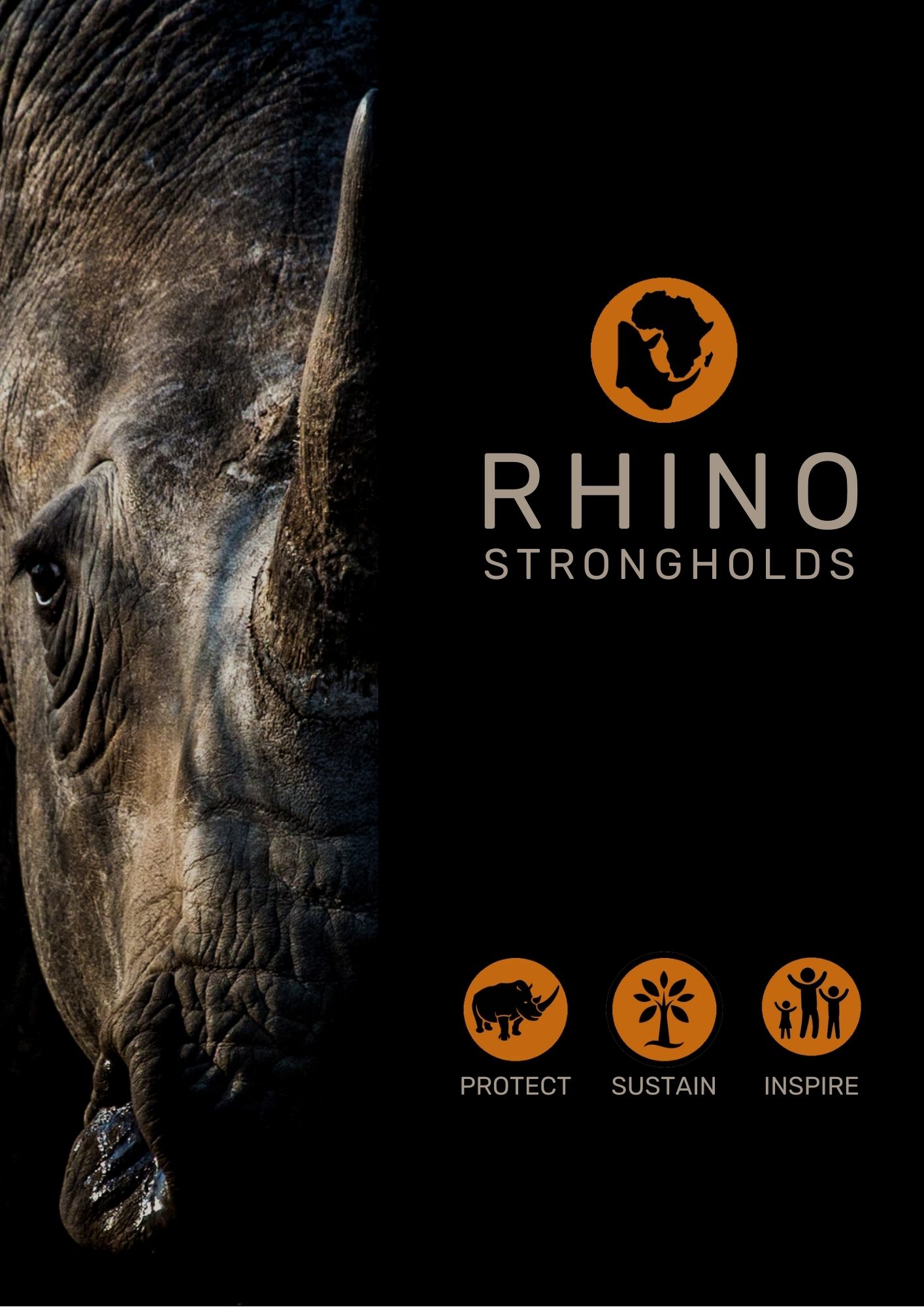 Rhino Strongholds are areas that provide the best possible security to reduce the risk of poaching and are large enough to allow the rhino to demonstrate natural behaviours, including migration between territories and genetically diverse breeding, without the need for hands on intervention by humans.

The largest rhino population in the world, found in Kruger National Park in South Africa, has decreased by over 60% in the last ten years. Building on a decade of active rhino conservation across Africa, Helping Rhinos has a vision to reverse this trend and ensure a safe and reproductive future for rhino by creating 'Rhino Strongholds'.

Continuing to work predominantly in Africa, the goal is to expand wild spaces by working with local communities to restore degraded land and create wildlife corridors.

Local communities will be integral to the success of Rhino Strongholds, which will provide employment opportunities and engage local people in wildlife conservation through education programmes and initiatives that improve livelihoods.

Rhino Strongholds will have a rich biodiversity and a healthy ecosystem that benefits a wide variety of both fauna and flora species. The areas will have scope to increase in size through the restoration of degraded habitat and the dropping of fences between already established wildlife areas.

The black rhino is CRITICALLY ENDANGERED with 95% of the population lost in the last 70 years.

The rhino has been POACHED the brink of EXTINCTION with 8,887 LOST in the last 12 years.

Kruger National Park's WHITE RHINO population has DECLINED by 70% in the last decade.

South Africa's population growth is forecast to rise by
20 MILLION by 2075, putting unprecedented pressure on WILD SPACES and the wildlife that rely on them to survive.

LIVELIHOODS are at risk as poaching, climate change and  increasing deforestation all impact LOCAL ECONOMIES.

It is CRITICAL that we ACT NOW to reverse these trends and create an environment that allows rhino populations to grow in their natural habitats.

THE IMPORTANCE OF
RHINO STRONGHOLDS

The rhinoceros is a keystone species, a giant herbivore whose everyday actions help to maintain a biodiversity that is critical to the survival of thousands of other wildlife species who share the same environment. Without this 'ecosystem engineer' the habitat would be irrevocably altered by overgrown or invasive wild flora.

Poaching in the last decade has seen around 30% of the global rhino population lost to poaching. Kruger National Park in South Africa, has seen it's white rhino numbers fall from over 11,000 in 2008 to 3,549 in 2019. This is a trend that is unsustainable and will see the rhino become extinct in our lifetime unless action is taken now.

Increasing pressure on wild spaces from human population growth in key rhino range states is reducing available rhino habitat and severely impacting on natural migratory behaviours. Half the forecast human population increase by 2100 will take place in Africa according to a 2012 United Nations report.

Maintaining viable rhino populations that have the freedom to roam in their natural habitat, when the pressures on land and natural resources are increasing at such a rapid rate, is a constant challenge. There is an urgent need to restore habitats back to their natural state while simultaneously ensuring protection processes are in place and providing a sustainable improved livelihood for the local communities.

The Three Components of a Rhino Stronghold 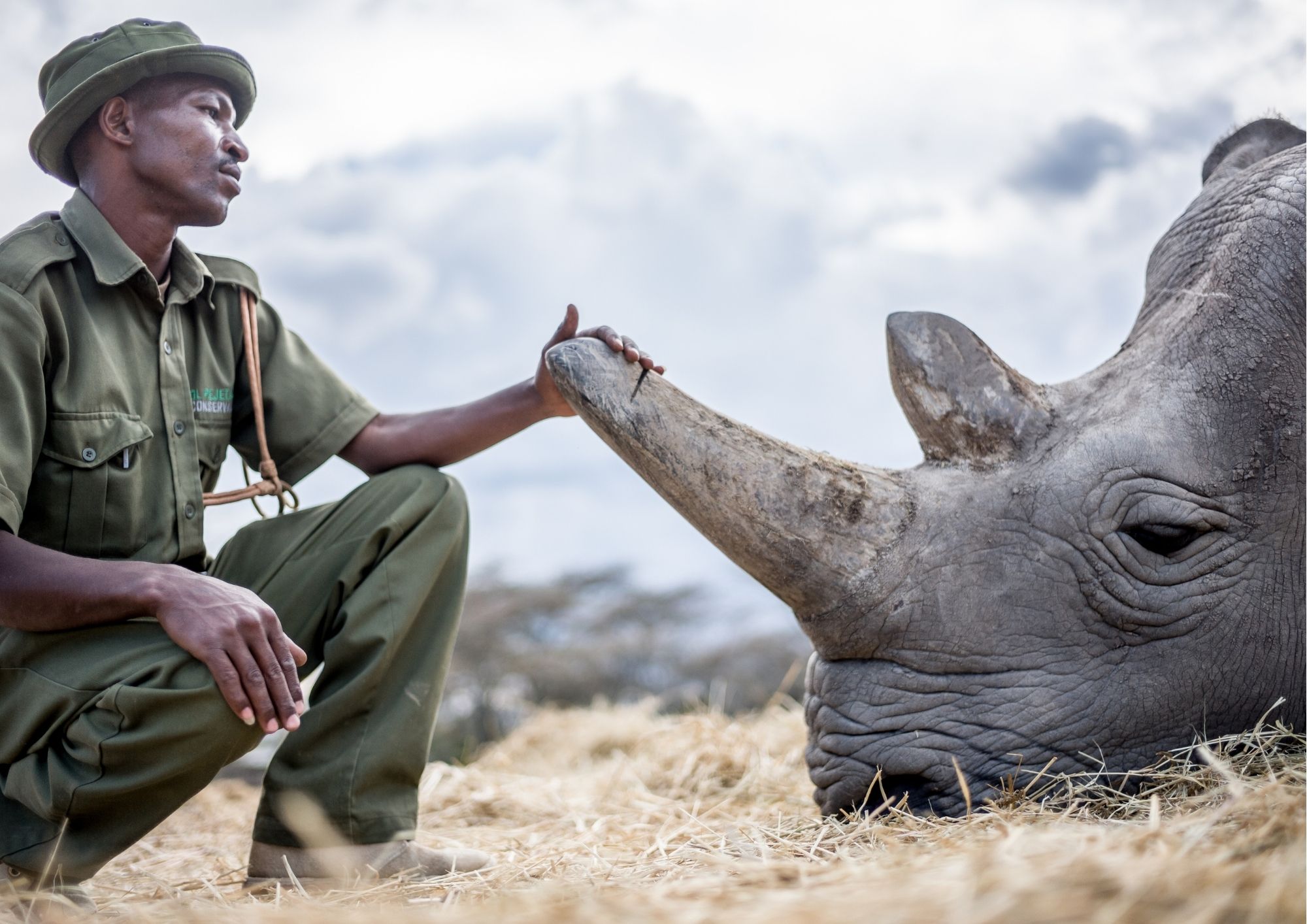 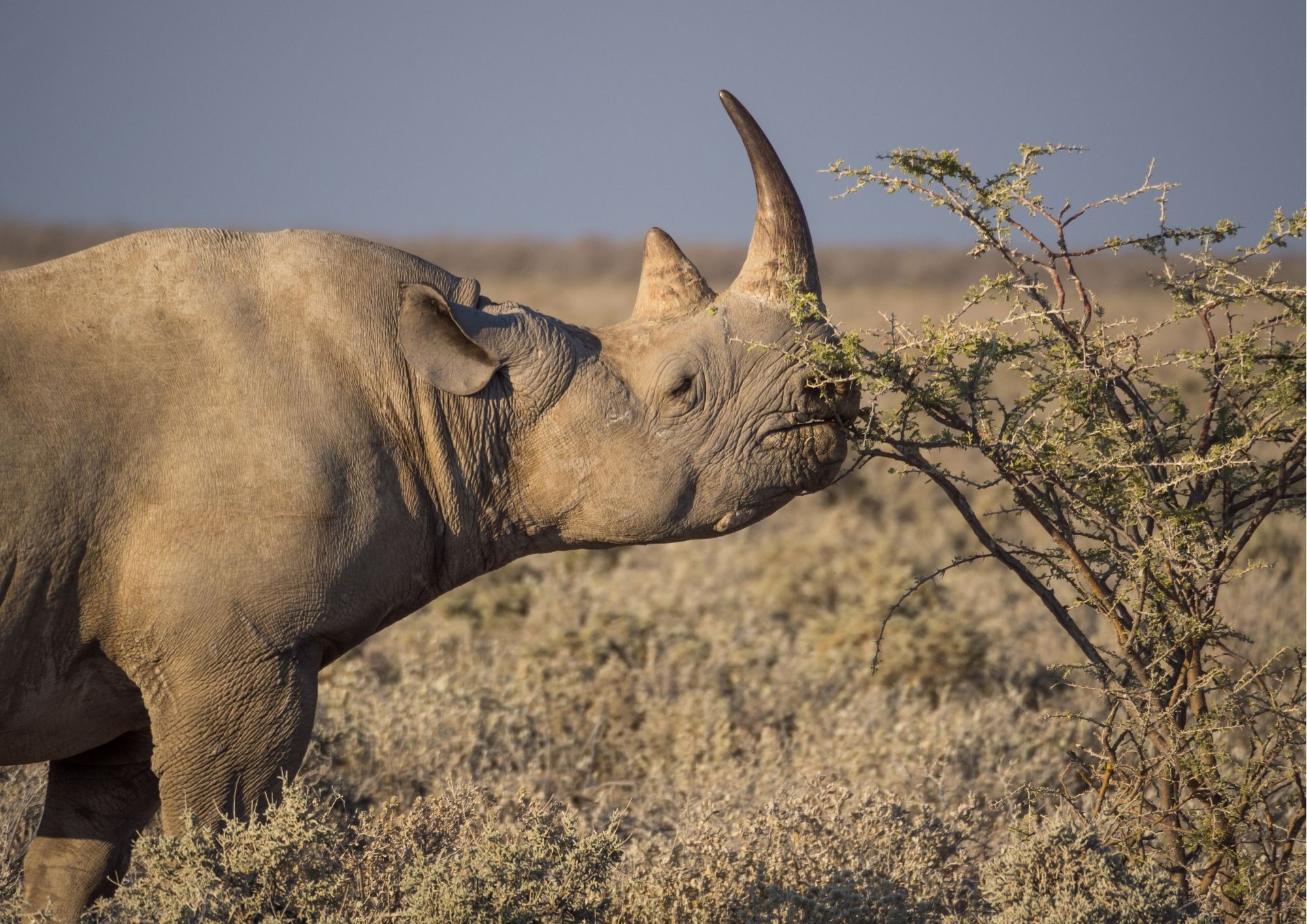 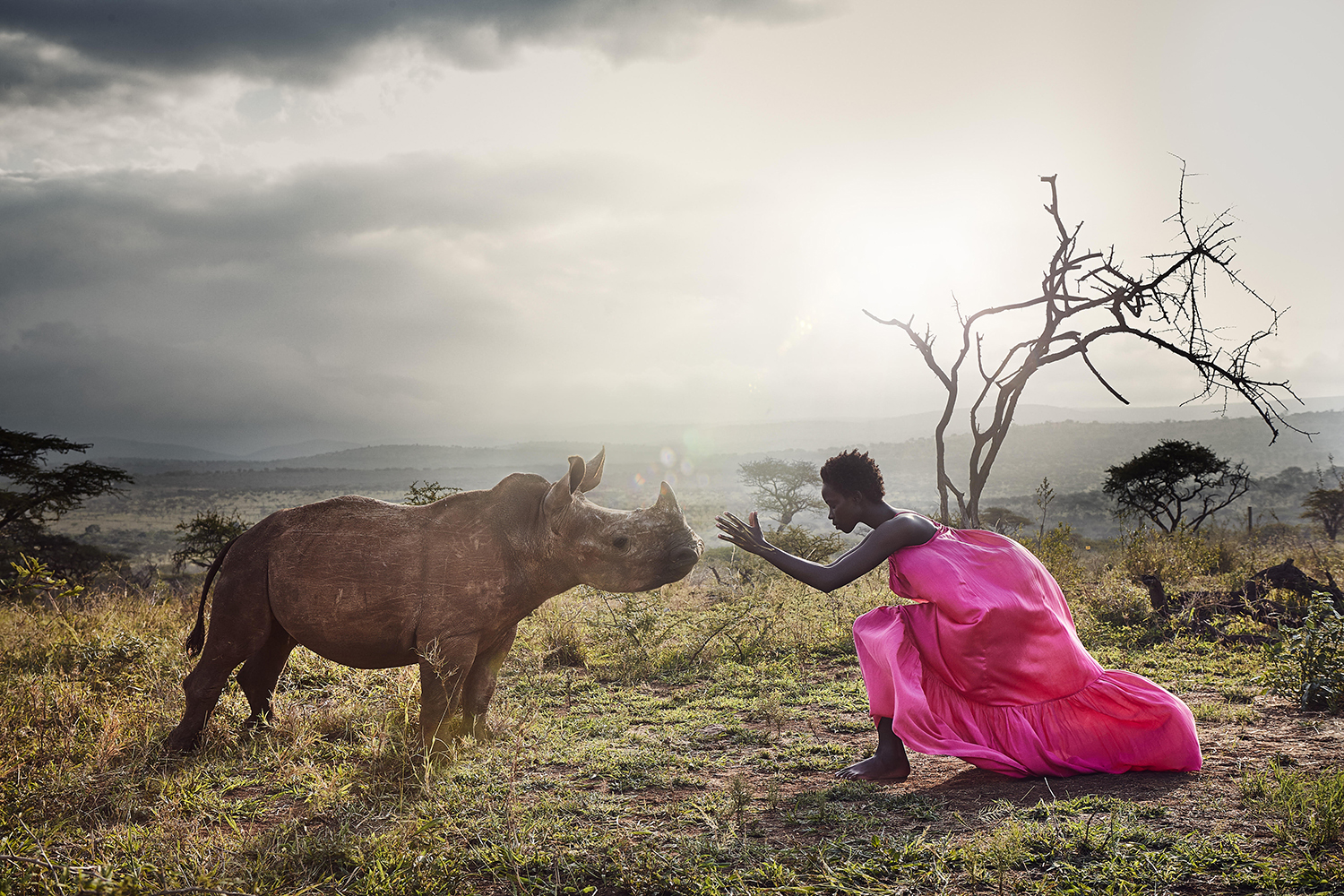 In partnership with The Zululand Conservation Trust and Manyoni Private Game Reserve, Helping Rhinos have been working towards a vision to create a Mega Wildlife Park. Northern KwaZulu-Natal has a large number of protected areas and game reserves and therefore lots of potential for expansion through various wildlife corridors. Identifying corridors to link protected areas is the first step to ultimately create a mega park.

The northern KZN region is one of the most poverty stricken areas in the country and in desperate need for change.  The mega park will not only boost conservation efforts in the region but also tourism and the local economy. Communities bordering the park will gain from increased employment and small business opportunities, which they desperately need. We also place great value on involving the community in conservation efforts, our hope is that with a larger area, and more focussed management we can utilise the collaborative opportunity to upskill and educate communities on the borders of this mega park with structured community outreach programmes. 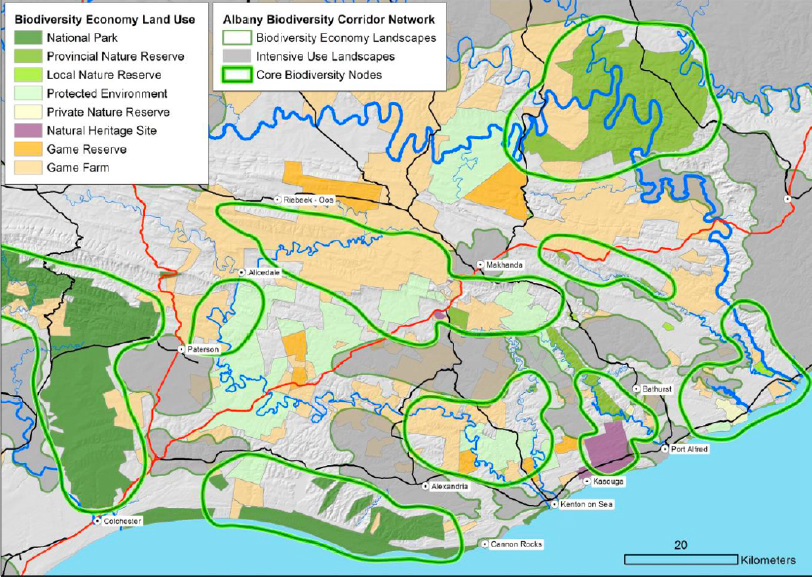 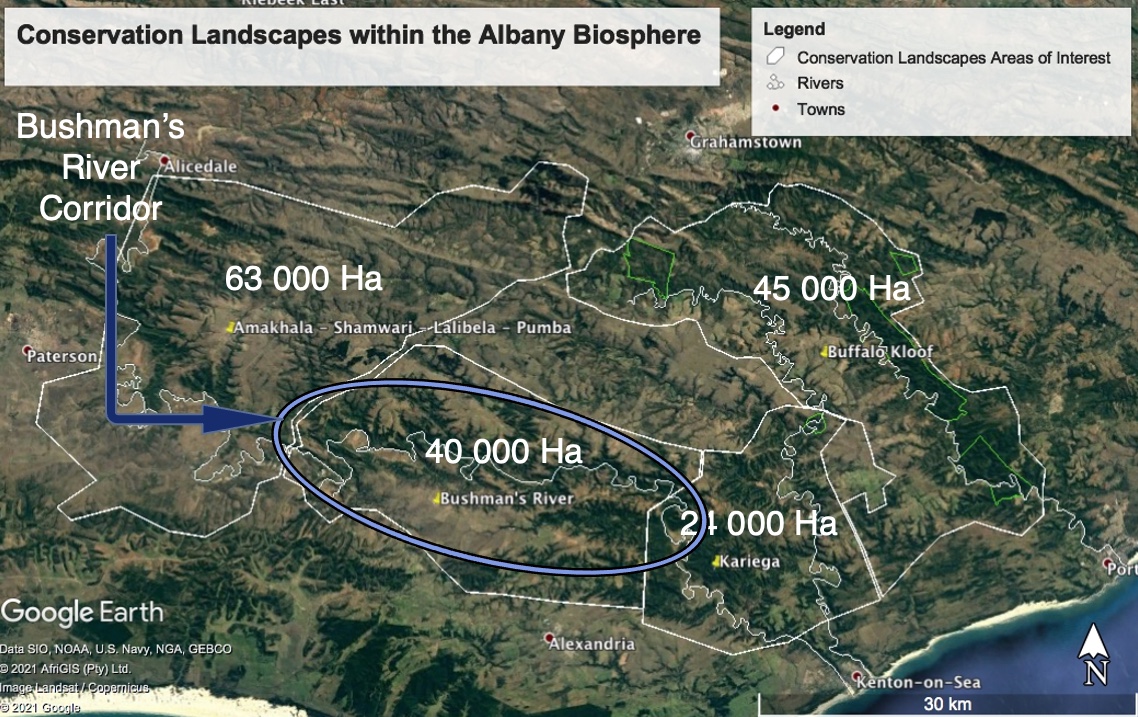 Ecosystem connectivity corridors are either contiguous land / river / wetland areas of natural vegetation that link geographically separate conservation landscapes. These corridors allow wildlife to migrate along them between the landscapes without hindrance. They can include structures, such as overpasses or underpasses across man-made barriers such as roads or railways, that also allow wildlife to move freely between, and within, wild spaces.

This Rhino Stronghold will ensure the enactment of accepted environmental conservation principles and practises, notably ecosystem connectivity at a landscape scale; biodiversity conservation; climate change mitigation, and, thereby and in conjunction, contributes to the socio-economic development and economic empowerment of the peoples of South Africa.

The project will also include a black rhino range expansion programme, ensuring a genetically diverse population is present in the Eastern Cape when the corridors are ready for wildlife to be introduced. 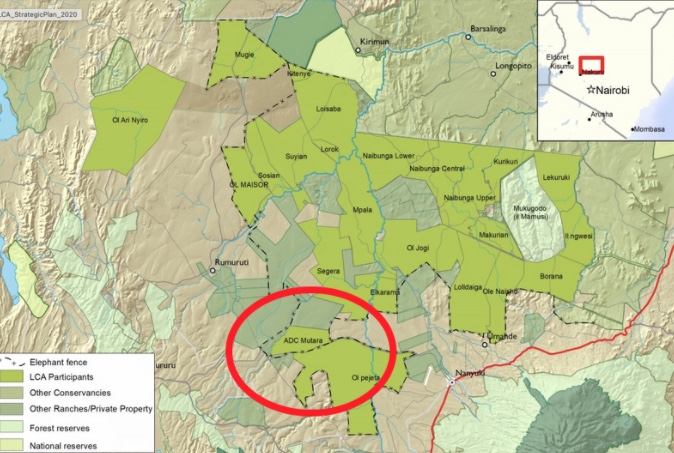 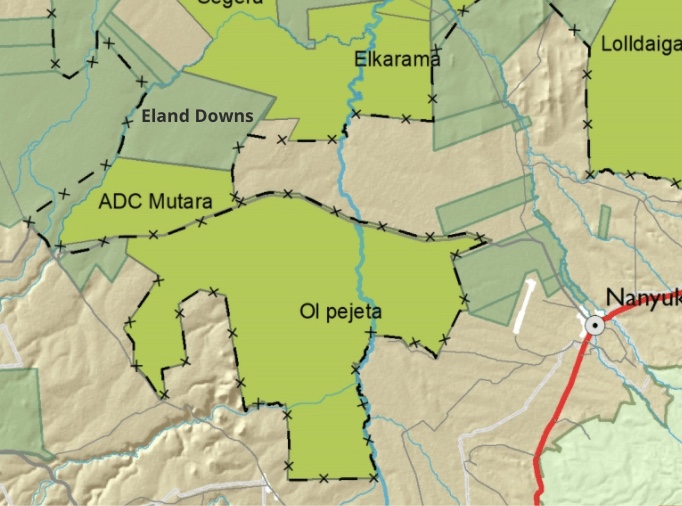 Kenya conserves 75% of the Critically Endangered eastern black rhino . In the early 1970s the population stood at ca.20,000 animals but a rapid decline, driven by industrial scale poaching, saw this number reduce to <350 by the late ‘80s. Intervention by the Government of Kenya led to the development of the National Rhino Strategy to protect and grow the population of black rhinos to 2000 by year 2030. As a result of this and conservation efforts across the country, the population stood at 794 by the end of 2019 and poaching had reduced to less than 1% per annum.

Ol Pejeta Conservancy in Laikipia County is home to the largest population of eastern black rhino in Africa, and top ranking in terms of continental importance.

Working in collaboration with surrounding conservancies and communities, the programme aims to connect more than 1 million hectares of protected land.  This would provide habitat for as many as 1,000 rhinos; create a safe migratory corridor for >7,000 elephants; and provide protection to other endangered species.  Implementation will take place in three phases – the first is to secure the neighbouring Mutara Conservation Area (MCA) and Eland Downs. The second will expand north and east, and the third expanding yet further eastward.

The outcome for Phase I of the programme is for secure habitat for black rhino to increase, by 15,000 hectares across MCA and Eland Downs.  Securing, rehabilitating, and protecting these lands will provide additional land to support rhino population growth and enhanced biodiversity.