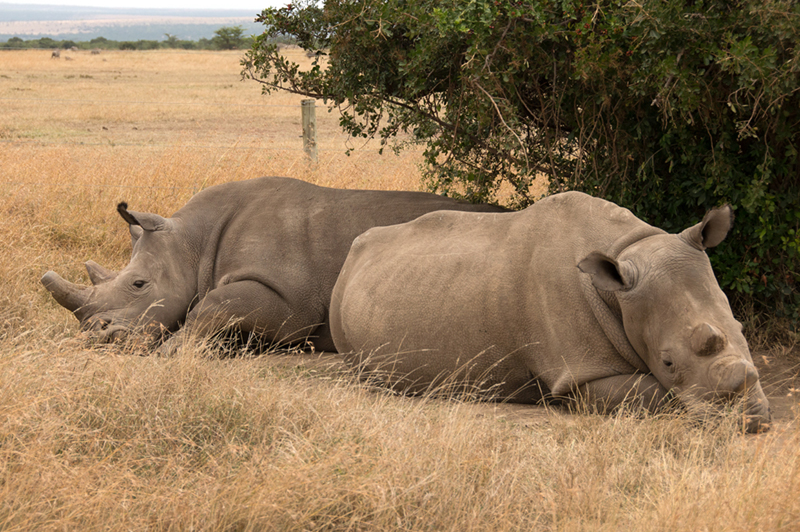 Only two northern white rhinos on the planet

Neither are able to breed naturally

Once the northern white rhino roamed the plains of central Africa in great numbers. Today NONE exist in their natural habitat.

In fact, only two northern white rhinos remain in the world today!

These two, both females Fatu (above left) and Najin (above right) reside at Ol Pejeta Conservancy in Kenya. Neither Najin or Fatu are able to breed naturally, so the future is bleak to say the least.

Najin and Fatu (mother and daughter), along with two males, Sudan and Suni were translocated from Dvur Kralove Zoo in the Czech republic to Ol Pejeta in December 2009, in the hope of natural breeding taking place. Despite regular occurrences of mating, no calf was produced.

This left Sudan as the last suviving male  of his species, however, born in 1973, Sudan was an old man. Sadly Sudan passed away in March 2018.

You can read our tribute to Sudan here.

CAN SCIENCE PROVIDE A SOLUTION?

With no hope of a next generation of northern white rhino, the only hope of a future for the sub-species is a scientific breakthrough.

Research is being carried out to find a way to reproduce a northern white rhino calf using in vitro fertilisation (IVF). It is not a simple task, and it is certainly expensive. Good progress has been made on developing the process, but it is estimated a further $10m is needed in order to complete the research and develop the procedures needed.

WATCH below Richard Vigne, CEO of Ol Pejeta Conservancy, give an update on the northern whites at a recent Helping Rhinos supporters event in London.

You can help care for the last two northern white rhino by adopting them. Simply click on the below button to choose who to adopt. You can also adopt in memory of Sudan.

You can also help by donating towards the IVF treatment by clicking the button below.