South Africa Rhino Poaching Statistics 2021, No Cause for Celebration or Respite

South Africa announce their official poaching statistics for 2021 which show a decrease in the number of rhino killed by poachers compared to the pre-Covid period in 2019, but an increase of 13% from 2020. Whilst most rhinos poached were on government owned land, there appears to be an increase in poaching on Private Reserves. These figures highlight the ongoing threat of poaching to rhino despite the brief respite in poaching pressure during the lockdown restrictions of 2020. 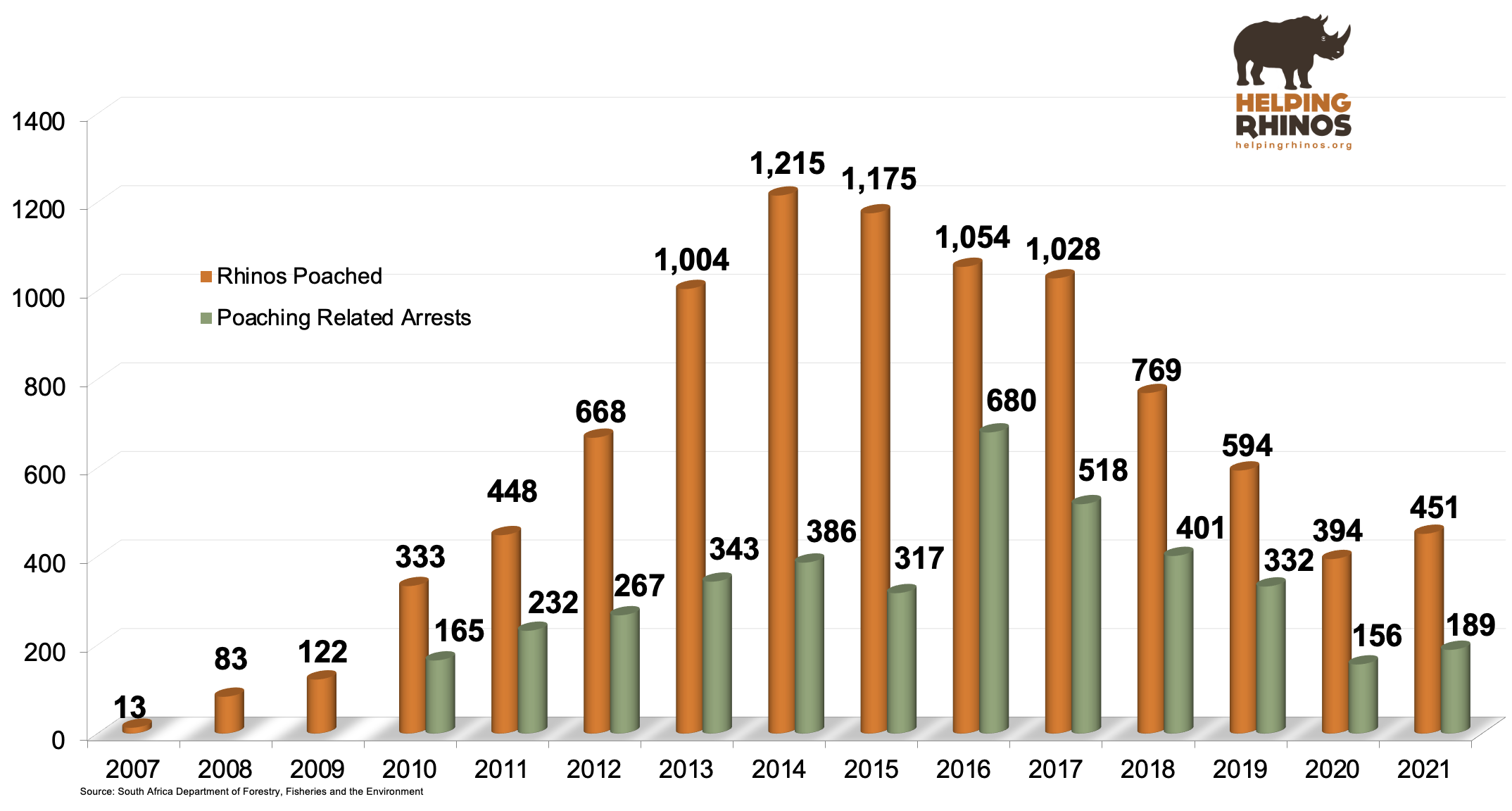 On the 8th of February 2022, the South African Department of Forestry, Fisheries and the Environment (DFFE) released their official poaching statistics for 2021.

The total number of rhinos poached in 2021 stands at 451, with 327 poached on government reserves, the majority of which occurred within the Kruger National Park. Whilst this is a 24% decrease from the 594 rhinos poached in 2019, it is still a jump up from the 2020 figure of 394 when local and international travel restrictions led to Reserve and Park closures.

Whilst there does appear to be a decrease in rhino poaching numbers from 2019, there is still a dramatic downward trend in rhino populations in recent years. It is clear that the effects of the lockdowns during the pandemic were short-lived and poachers are not only taking advantage of free movement again but are moving into areas (particularly in the northern provinces and in Private Game Reserves) where income from tourism has dropped dramatically during 2020 and most of 2021. These areas are struggling to provide adequate and effective anti-poaching measures, thus making them more vulnerable to poaching. 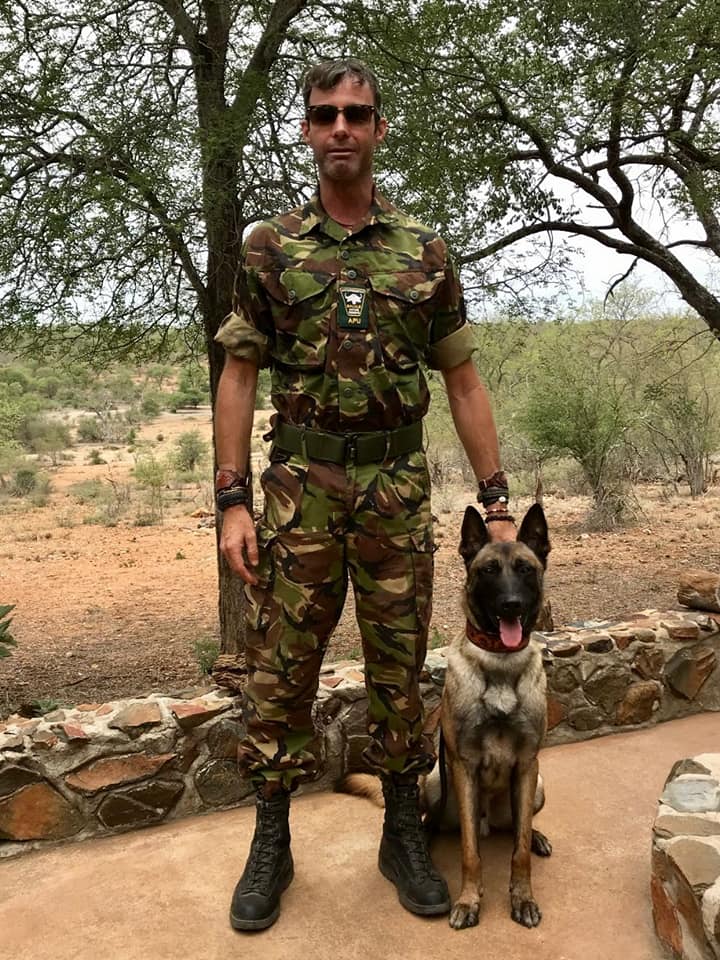 "Clearly, despite the respite that Covid brought us, there is a clear increase in poacher activity and effort. The supply-and-demand chain has reawakened with the relaxing of travel restrictions and the consequences can be seen clearly in the rhino poaching statistics for last year.

Although the overall trend is still positive, the reality is that the rhino population is not able to sustain the poacher pressure. Populations have been drastically reduced and therefore every rhino counts, more now than ever before.

We need to strengthen our efforts and push harder than ever before to make rhino poaching the most unprofitable and undesirable illegal enterprise in the illegal wildlife trade arena.

There is no cause for celebration, and no chance to rest"

• Poaching has declined in Kruger National Park, with 209 rhino poached. This is due to increased anti-poaching presence which is acting as a major deterrent to poachers.

• The other South African National Parks show zero poaching for 2021, but there is a worrying increase in poaching in the some of the Private Game Reserves in the northern provinces. Increases were seen in the provinces of Limpopo, Mpumalanga and Free State. These areas have been hit badly by lockdown measures and are struggling to return to pre-pandemic levels of income to support conservation.

• There were 189 arrests made relating to rhino poaching in 2021, with 40% from incidents occurring in the Kruger NP.

• There were 61 successful convictions of poachers and/or traffickers, with some sentences of more than 35 years.

We reported in August 2021 the half-year statistics (January to June 2021) which showed a 50% increase in rhinos poached across both National Parks and Private Game Reserves compared with the same period in 2020. Add to this the devastating spike in poaching cases in December 2021, 23 rhino killed over a 36-hour period, and it is clear that the respite brought about by strict lockdowns in 2020 is well and truly over. The poaching threat to rhino is still significant.

Although travel restrictions have eased and the borders are now open, international tourism, that supports conservation, including anti-poaching operations, is still a long way from recovering to pre-pandemic levels. The continued loss of revenue has placed an enormous strain on conservation resources. Indeed, after the high spike of poaching incidents in December 2021, many Reserves were forced to rely on the good will of their Rangers to continue to carry on with their duties during the holiday period and with limited fuel and technical functionality. This has put huge pressures on the Rangers, and the Reserves, not to mention the psychological impact of having to be constantly on the front line.

As we mentioned in our half-year poaching stats report in August last year, another reason for the increase in poaching on the Private Reserves is due to the size of the area. National Parks cover a larger landmass than their privately owned neighbours (for example the Kruger National Park is approximately the size of Israel). Add to this the general decrease in rhino populations in the Kruger over the last decade and it means that poachers will have to spend longer searching for rhino in the Kruger, covering a wider area to track one. By turning to a smaller area, such as a Private Reserve, the task of finding a rhino becomes easier.

Whilst the bottom line shows a definite downward trend in poaching numbers, these figures need to be approached with caution. The relaxing of travel restrictions has opened up poaching and smuggling opportunities once more. Rhino populations have been drastically reduced over the last ten years and are not able to sustain pressure from poaching and it becomes even more imperative that action must be taken to protect every single rhino.

Helping Rhinos is working closely with organisations on the ground to not only provide support for urgent anti-poaching measures but looking at ways to create and sustain healthy ecosystems and strong biodiversity for rhino through the creation of Rhino Strongholds.

Rhino Strongholds will have a rich biodiversity and a healthy ecosystem that benefits a wide variety of both fauna and flora species. The areas will have scope to increase in size through the restoration of degraded habitat and the dropping of fences between already established wildlife areas. They will provide the best possible security to reduce the risk of rhino poaching and are large enough to allow the rhino to demonstrate natural behaviours, including migration between territories and genetically diverse breeding.

Local communities will be integral to the success of Rhino Strongholds, which will provide employment opportunities and engage local people in wildlife conservation through education programmes and initiatives that improve livelihoods. You can find out more about our Rhino Strongholds initiative and the work currently underway here.

The protection of rhinos in South Africa is a responsibility that falls upon all of us, wherever we live in the world

HOW YOU CAN HELP:

• Support Helping Rhinos and respond to our urgent campaigns to raise funds for specific rhino protection initiatives, such as procedures to reapply tracking collars and to save new rhino orphans, and you can also make a donation now to help our work
• Adopt a rhino via our Adoption Centre – you can adopt a rhino orphan, a northern white rhino, miracle rhino poaching survivor Thandi or her son Mthetho, an anti-poaching unit dog or sponsor a Black Mamba female ranger
• Tell your friends about the threat to rhinos. Our rhino continue to face the very real threat of extinction if we do not act now to protect them - and the latest poaching statistics continue to reinforce this
• Sign up to our newsletter and follow our social media pages for all the latest rhino conservation and strongholds news

“It is important that we don’t look at these poaching stats in isolation of other key measures, such as rhino population numbers in key areas. Privately owned rhinos play an increasingly important role in the survival of rhino on our planet, and the jump in rhino being poached on private land is a real concern. We will continue to work to create and protect Rhino Strongholds across Africa, and with the continued help of our supporters I have great hope that we will give rhinos a future”

What are Rhinos Endangered