Raising a rhino orphan is a delicate task for even the most experienced rhino carer. Yet, when Zimi, short for Zimisele, arrived at our partner project, Zululand Rhino Orphanage it was immediately clear that she preferred the company of other rhino calves to humans, so the team quickly introduced her to the other orphaned rhinos resident there.

Zimi, an adorable white rhino, arrived at the orphanage on the 14th January 2020 after her mom passed away due to old injuries (not, thankfully, from rhino poaching) and at that time was estimated to be somewhere between 6 and 8 months. 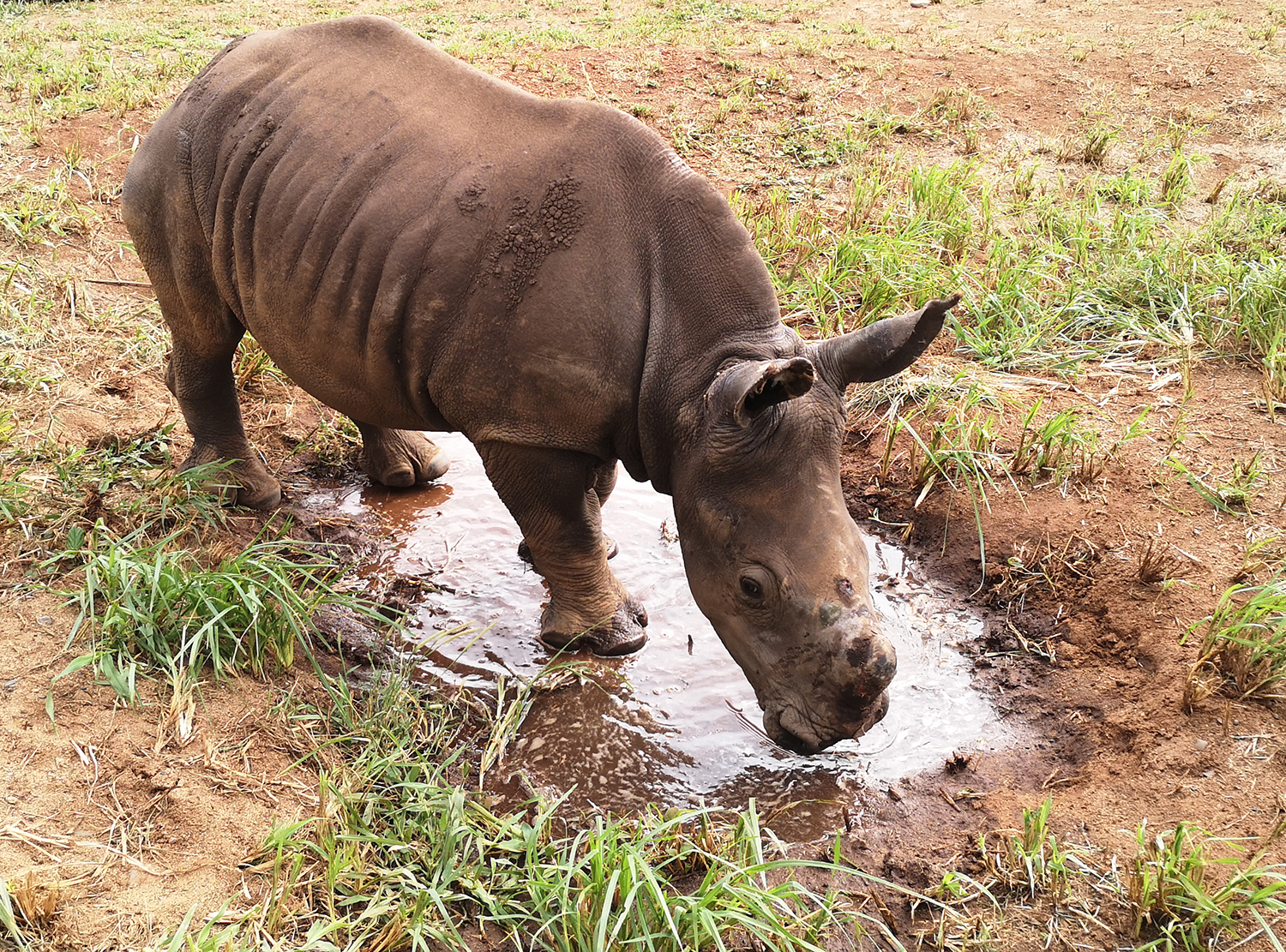 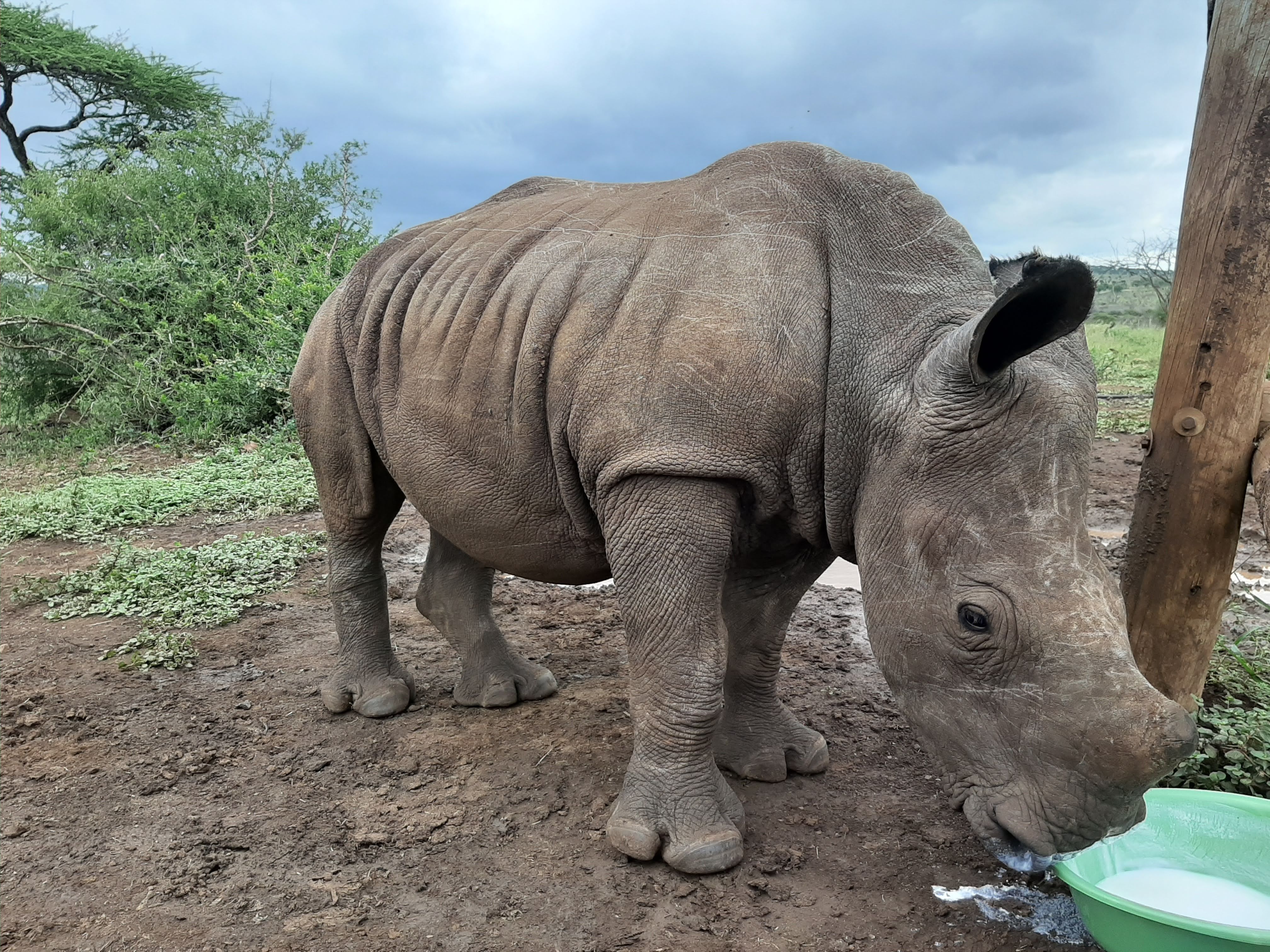 Despite a sad start, Zimi has settled in well to her new home and is doing well eating lots of grass. On hot days, she enjoys mud wallows and naps in the shade of a tree with her rhino orphan friends.

A confident little rhino, Zimi isn’t afraid to head-butt the boys back if they get a bit rough! She is a fast learner and already knows the morning and afternoon routines of getting let out and brought back in for the night, as well as being excellently behaved on the scale for her weekly weigh in.

Making friends with the other rhino orphans there, Makhosi, Mpilo, Khula and Bhanoyi, Zimi shares a night time boma with Khula and Bhanoyi and although she can typically be seen spending time with the boys throughout the day, she is often found grazing along with Makhosi and Mpilo.

This orphan rhino’s relationship with her carers is improving and growing stronger. Zimi is learning her name and comes up when they call her for her milk and, cheekily, if they are standing near a fence she will walk up and see what they are up to or if they have any snacks for her. She is far more trusting as they know she is happy and not stressed.

Read more about when Zimi first arrived at the orphanage here.

CARING FOR AND FEEDING A BABY RHINO

Ensuring a baby rhino receives all the nutrients she would have received from her mother takes time, patience and experienced handling by her human carers, especially for an endangered species where their care and protection is so important.

When Zimi first arrived, it was a challenge for the team as she refused milk all together. It’s thought this was due to her having weaned herself off of milk as her mother was very sick before her sad passing. As mum was no longer able to produce milk, Zimi was sadly no longer used to suckling milk. When the team at the rhino orphanage tried offering Zimi a bottle, although she happily took the teat into her mouth she didn’t suckle on it and seemed unsure of what to do with it and so she was offered her milk in a bucket.

After LOTS of patience Zimi started drinking the milk - a long process in the beginning as she showed no interest in the milk, most likely because she was not used to and didn't like this new and strange taste.

To get to this point the team started feeding her tasty lucerne to get used to them and then starting making 'milk balls', this was a combination of crushed rhino pellets, milk powder, small pieces of lucerne and water. A small success when she started eating these which continued for a few weeks as they altered the ratio of pellets to milk powder, gradually increasing the latter until they were made solely of milk powder.

One day as they tried to offer the baby rhino milk in a bucket, they had to feed her milk balls over the bucket to get her interested because at first she simply ignored it. It was so exciting when she started drinking! Slowly increasing the amount they were giving her, she is now on 4 feeds of 5 litres per day and this wonderful baby rhino gets very excited for her milk! 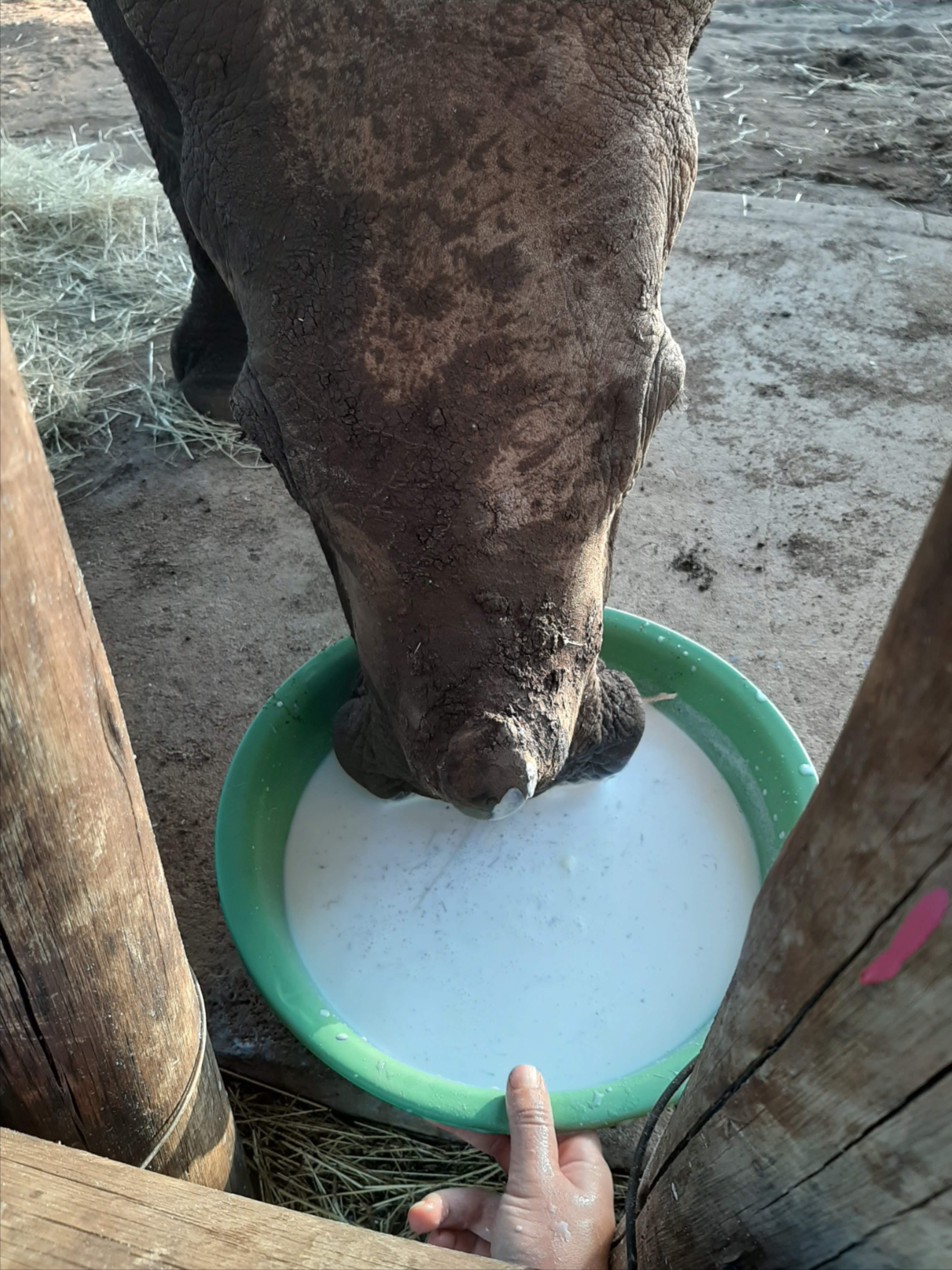 HOW MUCH MILK DOES A BABY RHINO DRINK? 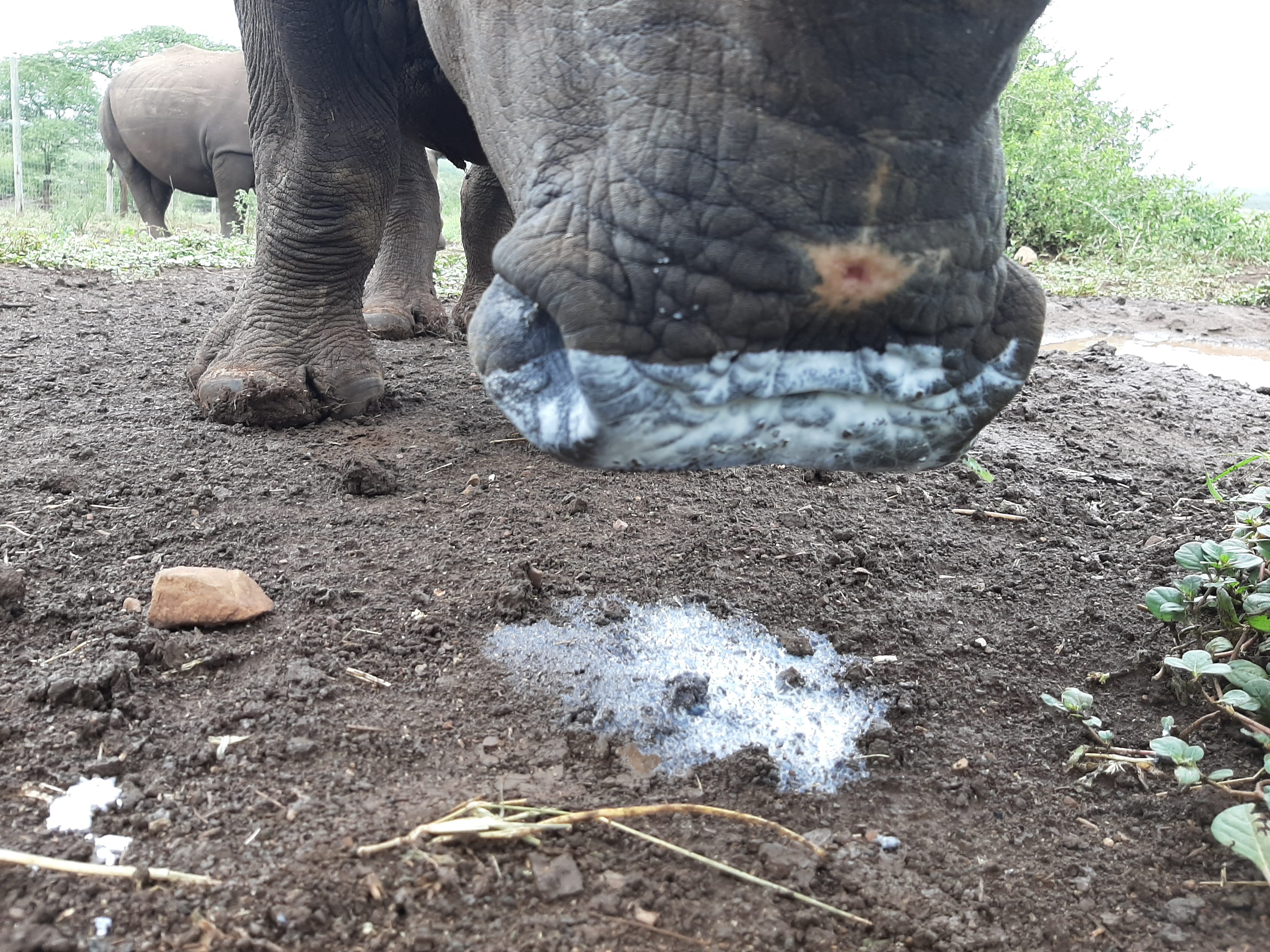 Zimi has been drinking 20 litres a day which is what she would be getting from her mother at her current age/weight of around 8 months old. Typically a rhino will stay on milk until they are 18 months old so expect Zimi to continue drinking milk for the next year.

The ultimate aim is that Zimi will drink milk from the bottle rather than the bucket as this will be a much easier, better and more natural way for her to get her milk. With patience and hard work the team at Zululand Rhino Orphanage will get her there.

Have you ever seen a baby rhino with a milk moustache? We, at Helping Rhinos, have fallen in love with this cute little orphan rhino!

HOW YOU CAN HELP ZIMI AND THE OTHER ORPHAN RHINOS

Zimi and the other orphan rhino calves at Zululand Rhino Orphanage need specialist ongoing care until they are ready to be re-integrated back into the wild.

You can help keep them safe and secure when you adopt a rhino like Zimi and her orphan rhino friends from only £5 per month. 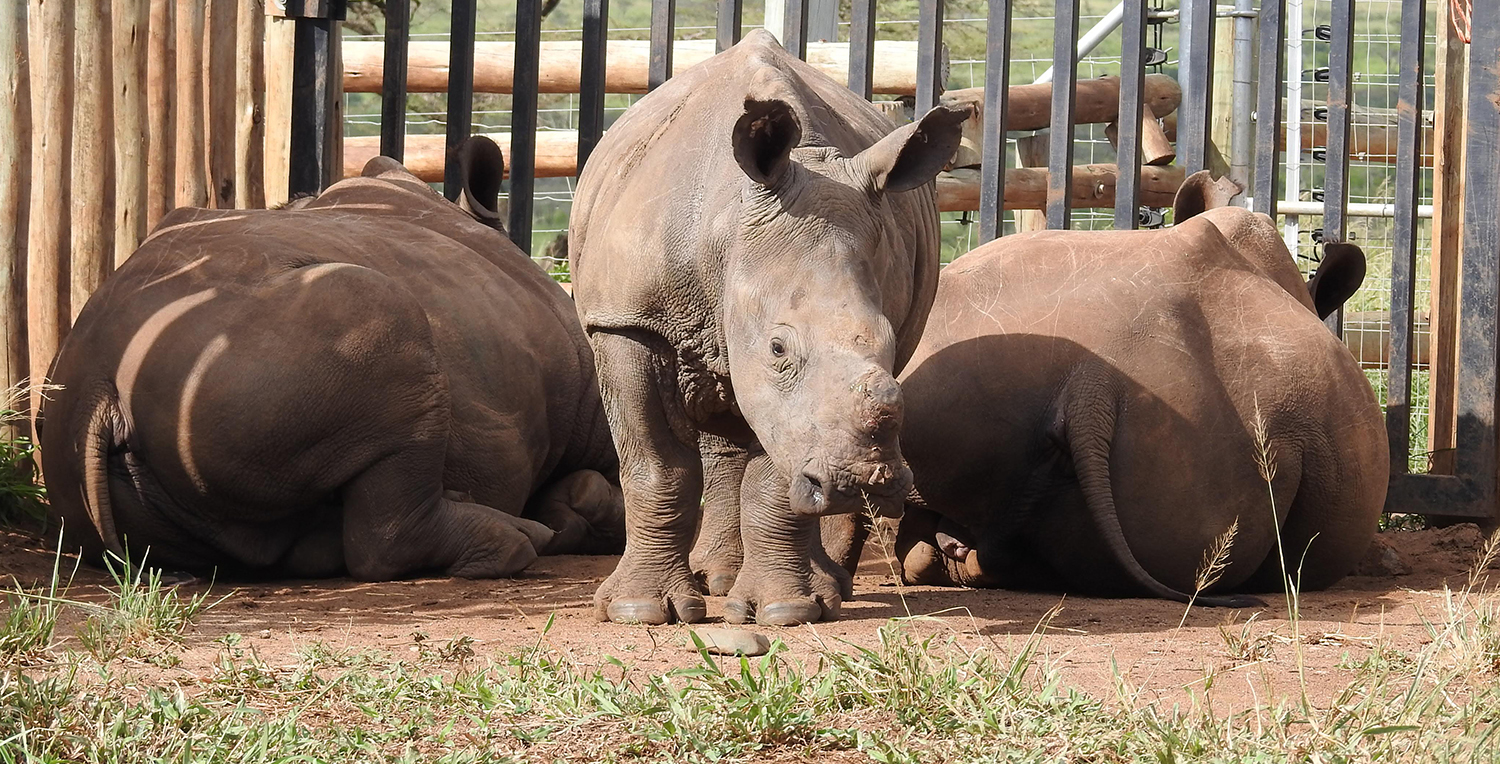