Daryll Pleasants - Meet the man training dogs to save rhinos

"We can all play a role in the preservation of our planet.

Change doesn't happen through belief and principles, it happens through conscious action"

Meet our special guest speaker at this year's spring talk 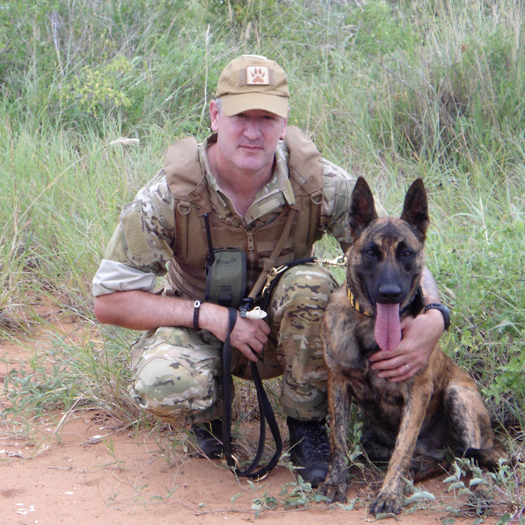 Daryll Pleasants is the founder of 'Animals Saving Animals', which trains and provides anti-poaching dogs to conservation organisations across the world. He will be speaking at the Shades of Grey: Seven Saviours of Black and White Rhino event. We caught up with him before the event to find out about his fascinating conservation efforts, and just how close he got to one of the world's most iconic species.

HR: Can you tell us about your background and what Animals Saving Animals aims to do?

DP: I served for eight years as a military dog instructor and an escape and evasion instructor with the armed forces. In 1998, I left the Army and set up a dog training business in North Norfolk, which included teaching dogs how to track.

Following a volunteer trip to Ol Pejeta Conservancy in Kenya, assisting in the training of their dog section, I realised what difference dogs could make to anti-poaching patrols. They are capable of tracking at night, can cover far more ground (and faster) than humans, and cannot be bribed!

I realised too that dogs had a far greater role in conservation than was being achieved at that time and from this the triple role anti-poaching dog evolved. Currently in Africa, dogs tend to be trained in one discipline, i.e. to patrol, apprehend or track. The dogs I am training are capable of fulfilling all these roles.

Animals Saving Animals was founded in 2016 and dogs are now deployed in five African countries with tremendous success.

HR: Why do you think dogs are proving to be such a successful weapon in protection of rhino and other endangered species?

DP: Dogs have one key skill set which neither technology nor man can replicate - their ability to track at night and alert us to the presence of a poacher (in favourable conditions up to a kilometre away). Until recently, poachers were free to move around a conservancy safe in the knowledge that anti-poaching teams couldn't find them. This has now changed putting the balance of power firmly in our favour.

HR: What breed of dogs are best for the K9 anti-poaching unit and why?

DP: The Belgian Malinois is our preferred breed for anti-poaching and conservation work because of their superior agility, intelligence and bite strength. They are the 'infantry soldier' of the dog world. Our dogs are hand selected from puppies and are required to undergo an intensive training programme before eventual deployment to the field.

HR: How do you go about training your dogs?

DP: The dogs spend the first year of their life training in the U.K because training facilities are better. At twelve weeks they commence work, starting with environmental training and socialisation. We have the support of many partner organisations like the Big Cat Sanctuary in Kent, which give us access to the lion enclosures to train in realistic environments.

As they progress, we introduce foundation tracking, bite work and ammunition/firearms search. All training is conducted with positive reinforcement principles and as a game.

At six months old we start tactical training which includes working under gunfire/smoke grenades and they are also taught car entry apprehension along with helicopter familiarisation and boat drills. At one year old they are deployed to their new conservancy or national park where they are teamed with their new handlers and receive a further six months operational training.

HR: What happens to the dogs when they finish service?

DP: When they finish operational service, they are used in a teaching role to assist in the instruction of new handlers. At times it is quite amusing because the dogs know the job inside out and the new handlers know nothing, so the dogs do take advantage! But from an instructional point of view it's an invaluable tool. When eventual retirement comes, the dogs stay on the conservancies, and tend to remain with their handlers.

HR: Are the dogs in any danger?

DP: To my knowledge no dog has been shot or injured through an anti-poaching operation. All dogs wear ballistic protective body armour. However, dogs are not fired upon either. Poaching happens at night and most poachers don't carry night vision equipment so vision is already restricted. Because of the dog's shape, it's also hidden by the long grass and bushes. Also, dogs will naturally pick the easiest route to negotiate an obstacle; they won't run in a straight line. So, poachers' chances are pretty slim at hitting the dog. Behind the dog are armed handlers, who are ready to arrest. So, poachers generally surrender!

Shots are exchanged between poachers and rangers on regular occasions but dogs are never released into those situations. The primary role of an anti-poaching dog is to track and, where necessary, apprehend.

HR: Why is rhino conservation so important to you?

DP: In all honesty it's not just rhino. Africa is one of the last great wildernesses of the world and has given me a great deal of pleasure and peace. Unfortunately, in many cases we have failed in our role as guardians of the planet. It's all too easy with the busy lives we lead to say 'It's somebody else's responsibility', sit back and then retweet a conservation slogan with a belief we've done our bit.

On a personal note it will be lovely to see so many people attending the event actively in support of Ol Pejeta and Helping Rhinos making conscious actions to initiate change.

HR: Have you had any close encounters with rhinos?

DP: I've a couple of close calls with rhino, on both occasions it was chance encounters whilst out working with the dogs with a team of trackers. One in particular was actually quite funny because the dog was our saviour!

On this occasion we were patrolling in tight scrub bush and a black rhino was grazing nearby unseen. Now white rhino are generally quite docile, but black rhino act in completely the opposite manner and every meeting is as if the whole African bush belongs to them and you are in their back yard trespassing!

Upon discovering (well almost falling over) the rhino, he immediately started throwing his head around and snorting which in rhino terms means 'one of us is going to be in a lot of pain shortly I suggest you leave.'

Being supportive of his decision we ran in all directions (forgot all the literature about what to do if you encounter an angry rhino). I headed for the nearest tree with 3.5 tonnes of angry rhino gathering momentum towards me.

One of the other handlers dropped the lead of his dog whilst making his escape. To my surprise, I looked back and saw the dog start circling the rhino, thinking this was a great game with his new friend.

I think the rhino actually got somewhat disorientated with the dog doing laps around his legs and it just stopped, turned around and trotted off into the bush snorting and grunting.

Now I know there's a lesson to be learned from this story, but I'm stumped if I know what it is!

HR: What's next for you?

DP: I am presently training a dog section for Rhino Conservation Botswana. 'Savas and Prima' will be deployed in June this year and will be the first dogs to go into Botswana in an anti-poaching role. We are also presently investigating placing dogs in India to assist with tiger conservation.

Thanks Daryll. We look forward to hearing more at our event Shades of Grey event on 15th March in London.

Hear more from Daryll and our other inspiring speakers at our Spring Talk;  Shades of Grey - Seven Saviours of the Black and White Rhino on 15th March in London. 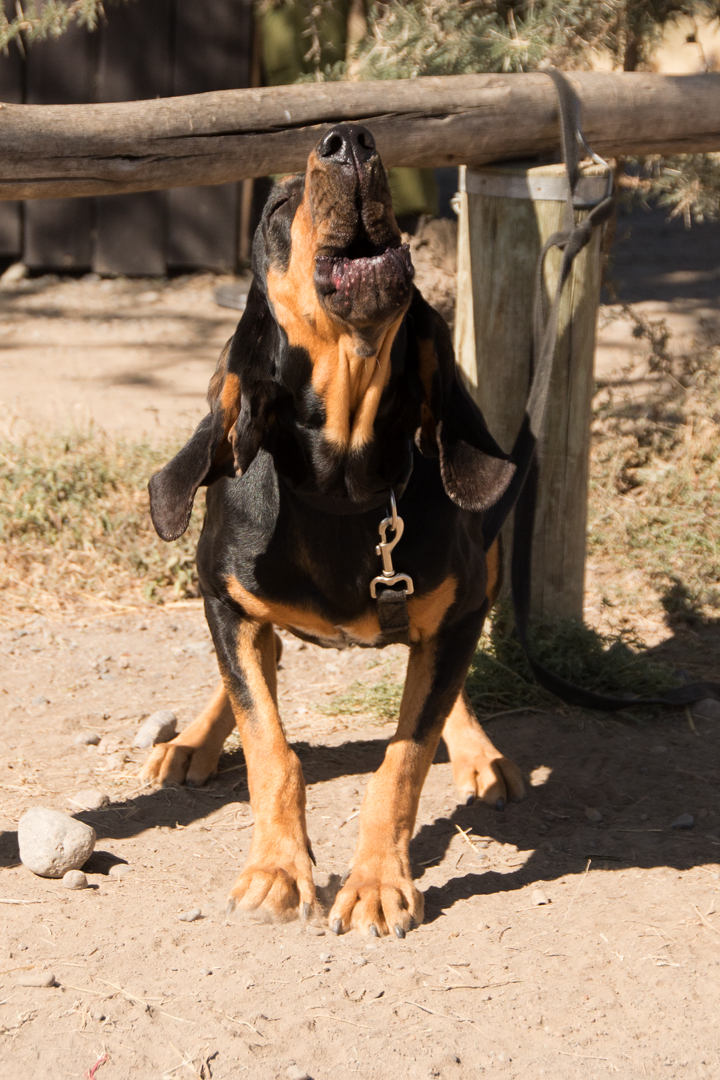 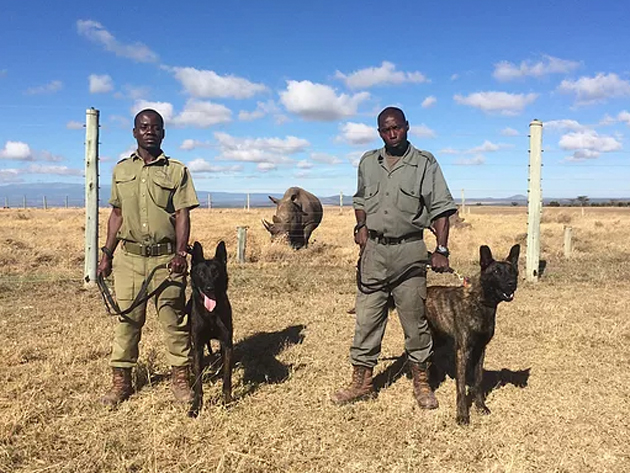 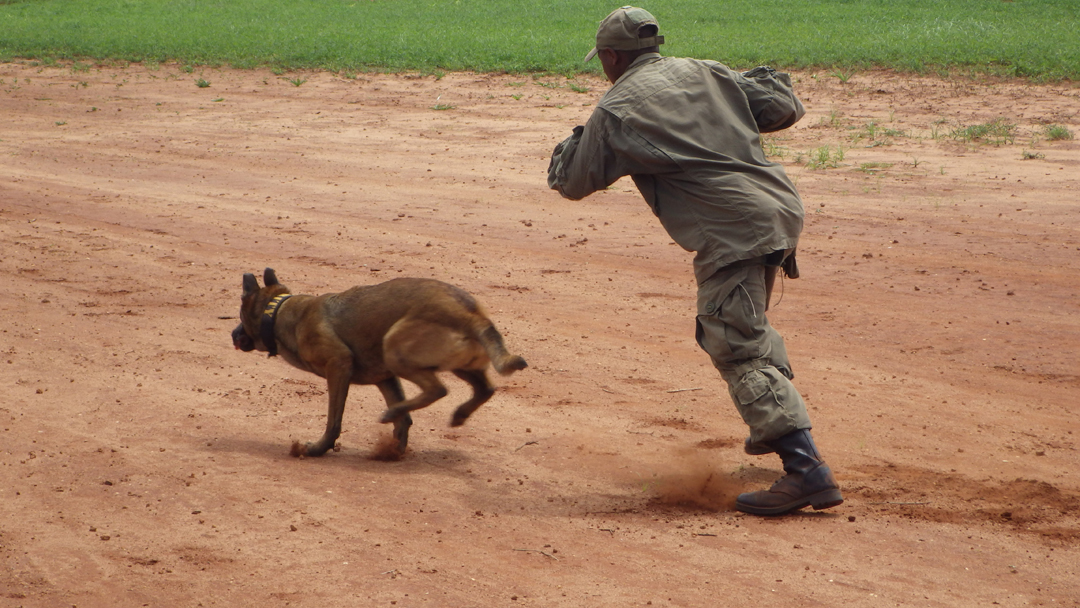 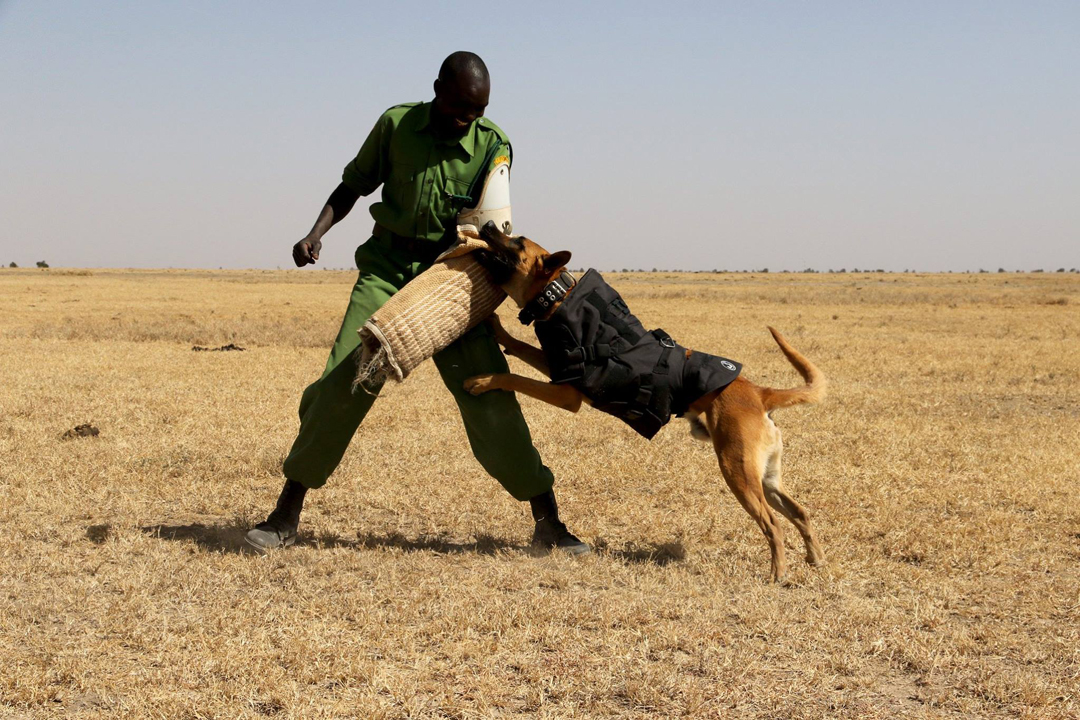