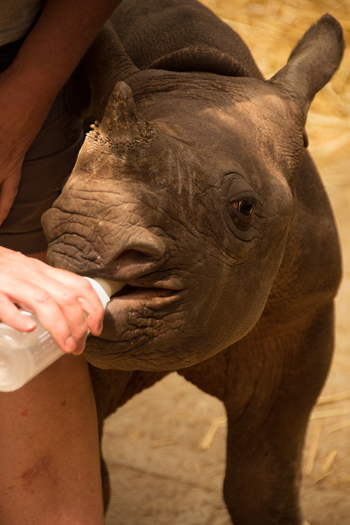 It is with great sadness that we share with you the news that the Fundimvelo Thula Thula Rhino Orphanage, our partner in the field for the last three years, have taken the very tough decision to close permanently.  This decision has been made following the brutal poaching incident at the Orphanage in February this year.

Following the poaching attack, independent security reviews have been undertaken at the site, and the decision to permanently close has been made with the safety of staff an animals the only consideration.

All staff and animals have now been removed from the Thula Thula Rhino Orphanage site and are in a secret location.

We will write individually to all adopters of a rhino orphan at Thula Thula in the coming days. All funds will received will continue to be used to care for the rhino orphans at their new location.

We would like to thank everyone for their support of the Fundimvelo Thula Thula Rhino Orphanage since it opened, and in particular since the attack in February.

Below is the official press release from the Lawrence Anthony Earth Organisation, our partner responsible for the management of the Orphanage.

The Fundimvelo Thula Thula Rhino Orphanage experienced a brutal poaching attack in February that resulted in an assault on staff and the tragic loss of two rhino calves that were both shot and their horns removed. Since the attack, the Lawrence Anthony Earth Organisation, who administers the facility, has focussed on the immediate safety of the staff, volunteers and remaining animals on site as well as providing support for the police and security experts investigating the incident. In a recent statement explaining the way forward, LAEO Directors detailed an interim plan to move the animals and staff off-site to give their team a chance to recover from the trauma and allow management time to conduct independent security assessments and review the findings of the criminal investigation.

"It is Lawrence Anthony Earth Organisation's responsibility to ensure that we meticulously weigh up all the factors of the investigation and security reports. Our focus is ensuring that the facility is safe for both people and animals, managed according to best practise animal rehabilitation protocols, and is sustainable." commented Yvette Taylor from LAEO.

Ongoing security challenges experienced since the attack and the review of the independent security assessments have resulted in the LAEO Board of Directors making the heart wrenching decision to permanently close the Fundimvelo Thula Thula Rhino Orphanage. The security assessments highlighted critical issues that LAEO management felt could not be mitigated and these factors would have directly compromised the ongoing safety of everyone on-site. Additional costs to adequately secure the facility in the long-term proved prohibitive and impacted on the sustainability of the facility. The decision was taken as a direct result of advice from security experts, anti-poaching professionals and senior police officers.

FTTRO has made arrangements for the remainder of their donated funds to be channelled to the facilities who have taken over the care of the rhino calves. "Our supporters made donations in good faith to support the care of rhino orphans and we will ensure that their donations are still used for that purpose." said Yvette Taylor. "The animals have now all been moved together with their handlers to ensure continuity of care and all the rhino calves as well as Charlie, the hippo is doing well and has settled in their new surroundings. The Lawrence Anthony Earth Organisation wishes to thank the public for their overwhelming support during this challenging time."