The Illegal Wildlife Trade Conference (IWT) held last Thursday and Friday 11th and 12th October culminated in the signing of the 2018 Declaration on Illegal Wildlife Trade by 50 plus countries and the UK’s commitment to an additional £35 million of UK aid to protecting critical forest habitats and species threatened by extinction, including the five species of rhino.

The two-day conference, attended by HRH The Duke of Cambridge, Heads of State, Government Officials (representing 85 countries), business leaders, scientists and NGOs was a global coalition of delegates committed ending wildlife crime through a trans-frontier approach to conservation. The discussions over two days were truly inspiring.

HRH Prince William amplified the issues in his opening speech, “Our task is to address one of the greatest challenges facing humankind. How can we protect the magnificence of the natural world from the criminal gangs who threaten human beings just as surely as they plunder the planet.”

To paraphrase Rt Hon Michael Gove MP “Gradually, then suddenly is Man’s impact on the earth, hacking away at the roots of our tree of life. We must work together as one world to save the only world we have.”

The Conference, building on the success of the London Declaration in 2014, in which global leaders recognised the economic, social and environmental consequences of IWT, focussed on three key areas: 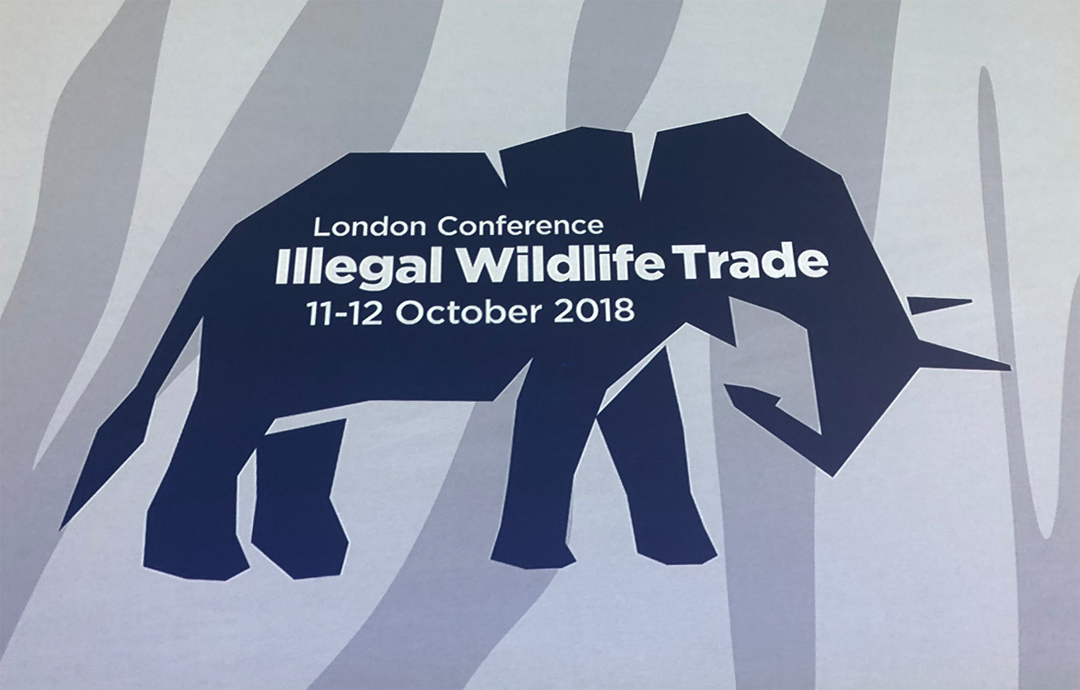 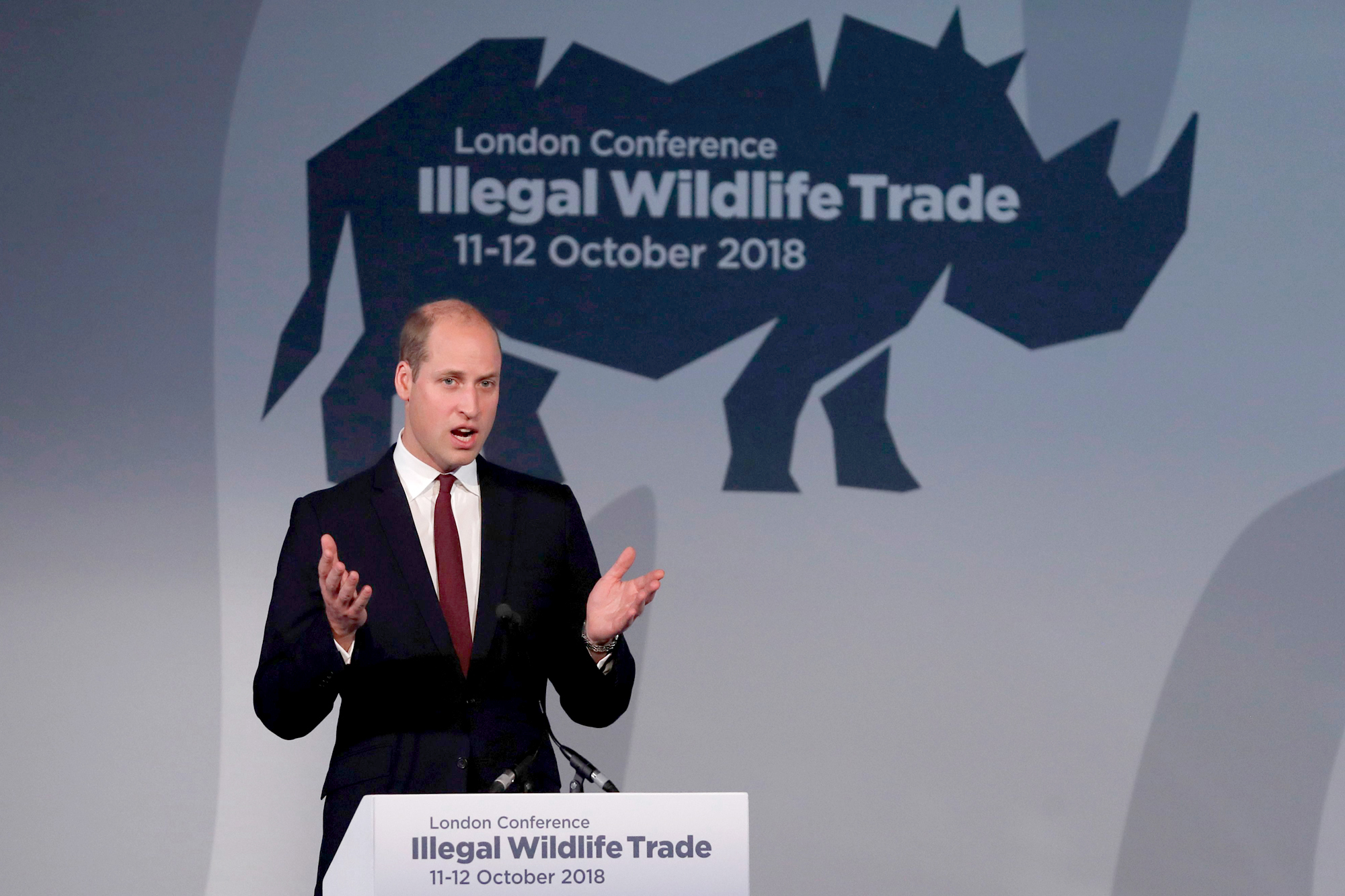 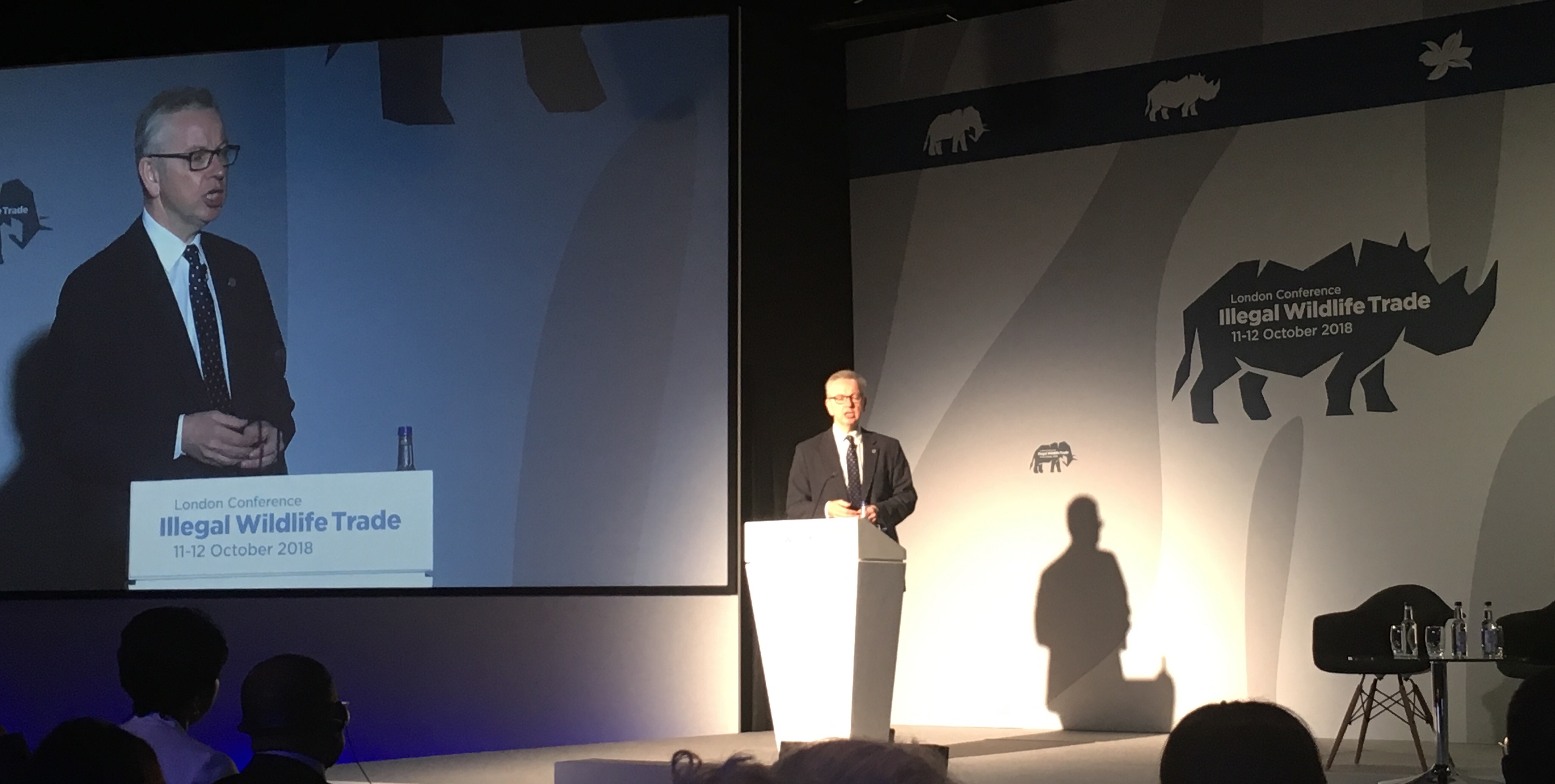 The 2018 Declaration on Illegal Wildlife Trade has been signed by more than 50 countries committing to action to protect endangered species around the globe and more are expected to sign up to it in the coming days.

It was also announced that more than 20 global financial institutions had signed up to a new private sector Financial Taskforce, designed to obstruct the flows of the ill-gotten gains of the illegal wildlife trade.

Lord William Hague updated the Conference on the achievements of the Transport Taskforce, working with more than 100 transport companies to stymie movement of illegal wildlife products and it was also announced that similar number of travel and tourism companies had signed a Travel & Tourism Declaration to help combat the illegal wildlife trade.

It was not just the politicians that were lending their voice to the cause. International recording artist Ellie Goulding took to the stage to reafirm her commitment to bringing an end to a practice that threatens so much of the world's fauna and flora. A short film was also launched featuring international Premier League footballers adding their voice to #EndWildlifeCrime.

"We may be from different backgrounds and professions but our mission is the same and we must engage as many people as possible to disrupt Illegal Wildlife Trade" Ellie Goulding, UN Ambassador 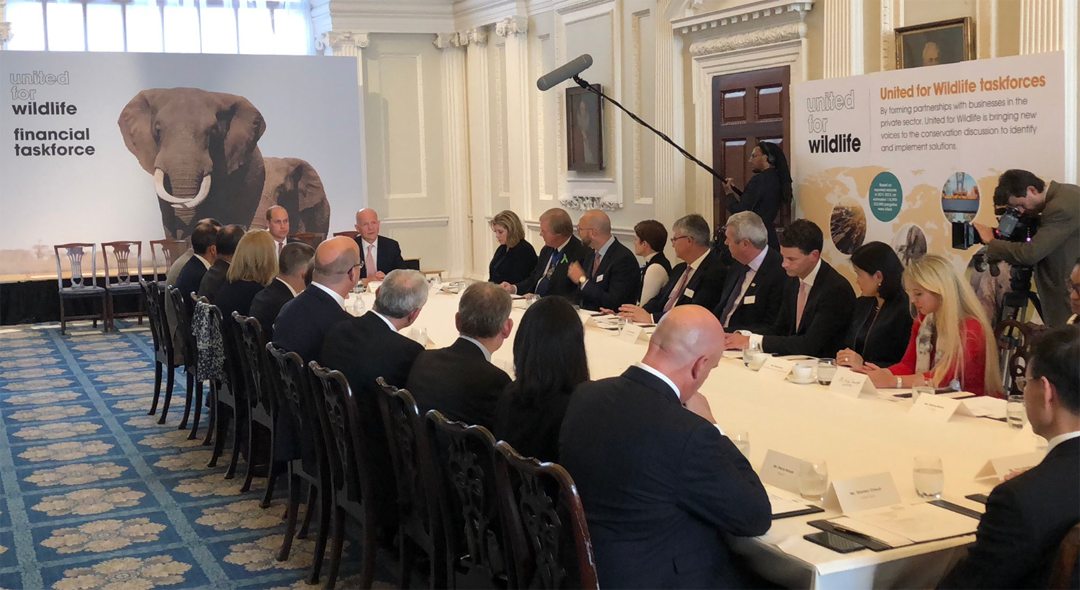 WHAT DOES THE IWT CONFERENCE MEAN FOR RHINOS?

So was the Conference a success? What was clear throughout the discussions, was the determination and the resolve to find workable solutions to the challenges and the issues that we face. As with Helping Rhinos 'Seven Saviours' there was much discussion around making the environment a positive language for everyone; engaging with communities to improve biodiversity, creating jobs and making conservation an economically viable ‘industry’. Triple-win policies in other words that are good for our health, good for the economy and great for biodiversity.

When you hear about countries such as Zimbabwe, Zambia, Namibia, Angola and Botswana creating corridors and a network of existing National Parks and new Parks to help rhinos and other species, linking up to 50 million Hectares to create the largest nature reserve in the world, and know that in the last few days the idea has received the ‘buy-in’ of the countries leaders, that it is beyond the concept stage, you realise and hope that the talking shops are finally leading to action.

Our own CEO, Simon Jones who was attending the conference commented:

"It was inspiring to see and hear so many leaders from around the world, from all backgrounds including Government, businesses and NGO's, coming together and striving for a collaborative approach to tackle the 4th largest illicit trade on the planet. There was a recognition that the illegal wildlife trade has a damaging impact on so much more than just our wildlife and biodiversity, with local communities being ripped apart as a result of this criminal activity. The time for action is now, and at Helping Rhinos we are committed to joining other conservation leaders to find and implement innovative solutions to ending the illegal wildlife trade and ensuring rhinos and all endangered species have a future in their natural habitat". 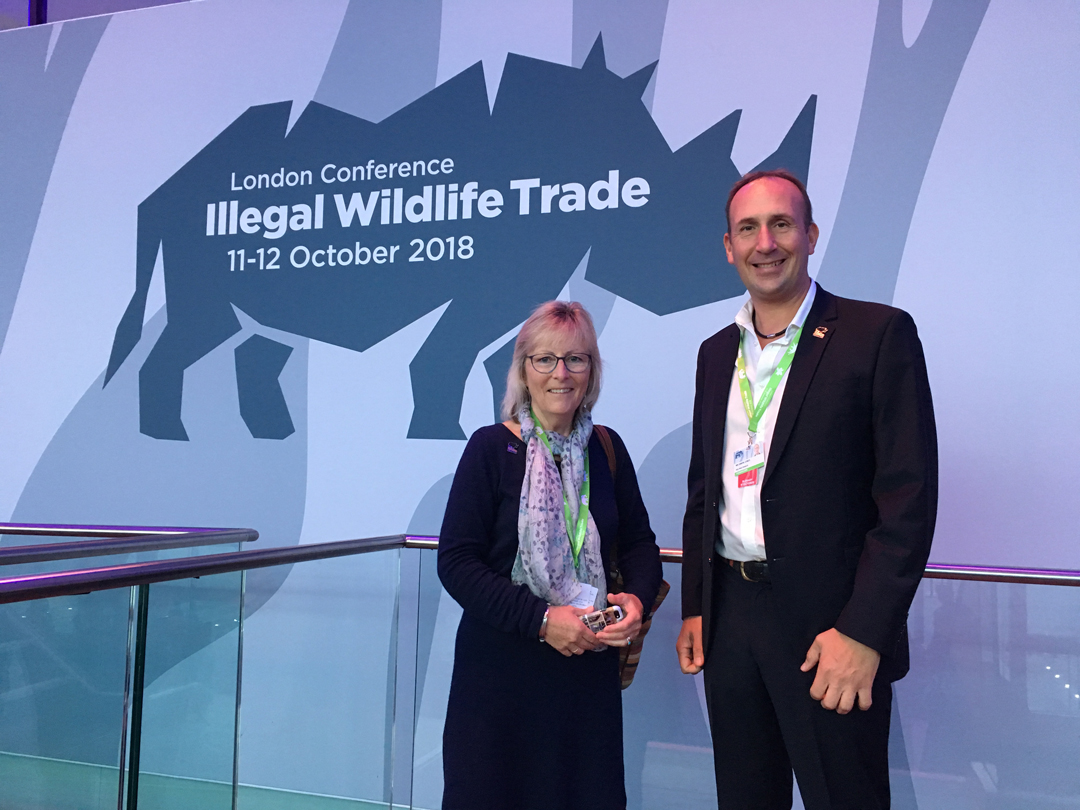 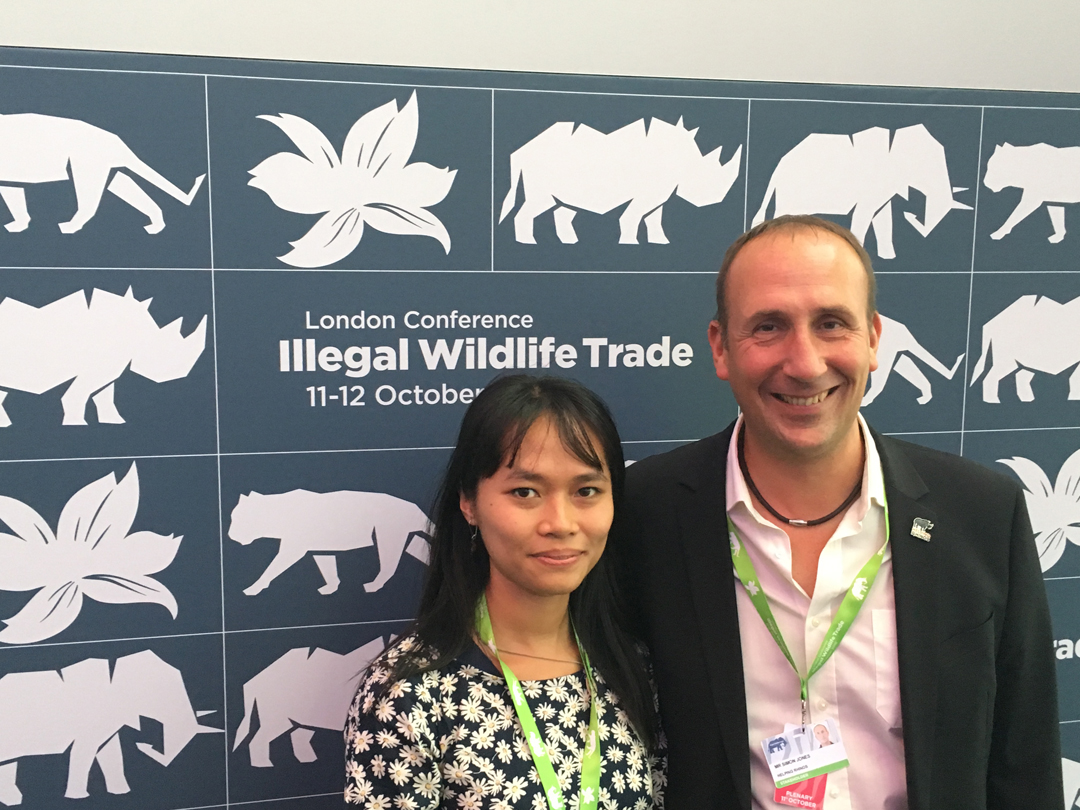